*****See Kayla's pic from being on TV last night at the bottom of this post***
Ian ran his 1st cross country race of the school year yesterday and took 1st place!!! How cool is that! Ron called last night and said he did just great!! We're really proud of him! 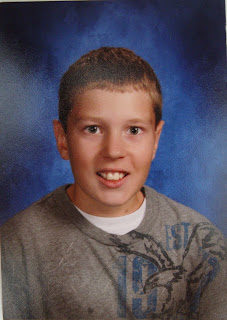 On that same note of competition...Ron also won something! Ron won a chance to participate in a punt and kick contest at the school football game recently! Turns out Ron was the only 'one' (school included) to score that night! He scored a field goal and won a $50 certificate! This family is on a roll for sure!! I would loved to have seen that effort as well! Way to go guys!!!

Ron also said last night that Kayla was at the Ball State U football game around the 32 yard line, which was being televised on ESPNU. We did go back and forth between the lions (they won!!)and the ESPNU channel but we never did see her. They would put the cameras on the students from time to time but guess we missed her. That would have been great to have seen her on TV!
I'm off to do some dye painting/sun printing today. Weather has been just beautiful this past week with temps in the low to mid 70's! Perfect weather for me and even Bob is enjoying golfing in this temperature. Tomorrow, Carol, Mary and I are headed to Detroit to visit some art galleries, lunch, supply stores, desserts and whatever else we end up doing! Should be a nice girls day out!

Update!
Kayla sent this pic via email today! She did get on TV but it was right after half time and we missed it! How cool is that!! This is Kayla - in the middle w/red head band! 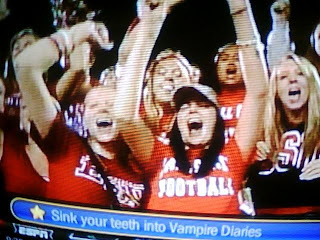