Well, we are headed home today!  Our first stop in Tenn. for the night, then on to Ohio...that gets us home early afternoon on Monday.  This was a hard year saying goodbye to so many of our friends.  I'm usually ready to go home and I am...but my emotions are running high this year just saying good bye to folks.
I guess as we age time does go by quickly (seems like we were just packing up to come down to Florida!) so hopefully, we'll be back before you know it!
My bud, Sally, got me a Dot to Dot book!  Have you seen these!  OK, yes, as a kid I'm sure you have but for adults!    How cool is this! 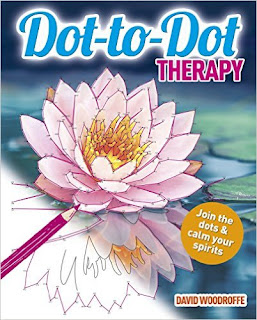 I already have pencils in my purse so I can play with this on the way home!  Thanks again, Sally!   So until next week....hopefully, it will be an uneventful trip home and I'll be posting soon artwork again!
Posted by Robbie at 6:00 AM 3 comments:

Yep..it's time to wind down or is that pack up!  We leave on Saturday to head back home.  But of course our last weeks in Florida are always SO busy!

Wrist (left) is better but I still can't lift, bend, etc. and now my right wrist is starting to get bad.  I have to admit I'm a little concerned....but I have Dr. appointment when I get home...maybe I'll go back on RA meds...who knows...until then...here's what I've been doing! Not art work, that's for sure!

This was Monday at the Freezer!  Bob's favorite place to eat! 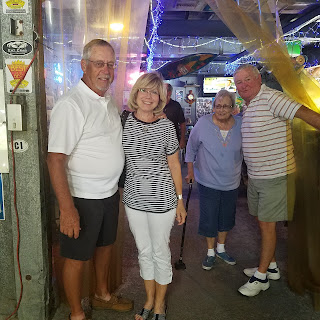 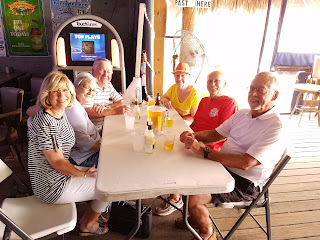 Yesterday, Sally and I took off to do some shopping and of course lunch!  Mainly, Sally was looking for Key Lime pie!  Seems every time she goes out to eat they run out!
Well, not yesterday! 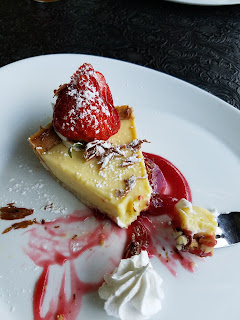 Next up, on Saturday, Marcia and I took off to downtown Ocala to visit some shops, walk around the farmers market at the square, then lunch at Harry's!  Of course, we had to stop at Heart's Desire and get a treat from Betty's Cakes!  No pics...and yes, I ate all the cake...well, half of it the next day, and I did get a slice for Bob too!
Last Thursday we had dinner at Carrabba's with the 'gang'!  Great meal...this Thursday we'll have our last dinner for 2016 at Blanca's...... 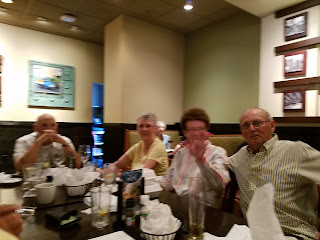 Yep, we are going to miss our friends and it's hard to say goodbye!  But I will be glad to see my kids and grand kids.  Plus, I'll be heading to IN for Kayla's wedding shower on the  14th and then in June we'll be off to Ohio for the wedding!  WooHoo...aren't we the travelers!
Posted by Robbie at 6:30 AM 3 comments:

Get with the program, Robbie!

I know this is the longest I have gone without a blog post!  And there's no excuse.  It's not like I've been sitting on my butt doing nothing!
I did some solar fast prints last week which I'm happy with. They are similar to some of the pieces I'm currently working on, but that's ok.  I need additional pieces for another project that needs to be done by fall. 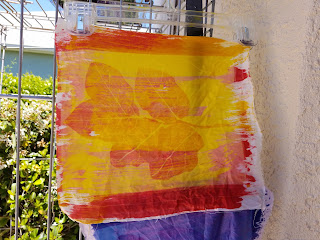 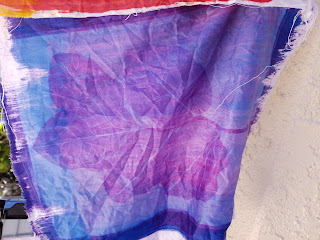 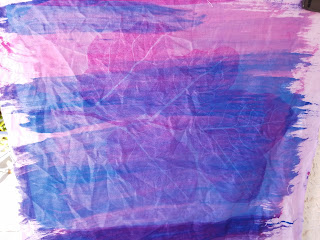 This past week I also played with some oil pastels and Inktense blocks with some art buds.  I only did 3 pieces.

The pieces were originally solar prints  but I forgot to rinse the pieces and left them out in the sun.  Well, what you get is a solid color!

Next time I played,  I stamped them and I was happy with that but....the next layer was calling so I used oil pastels on the blocks and now I am quite happy with the pieces.  I'm trying to get enough leaf blocks printed/created so I can use them for hand work too. 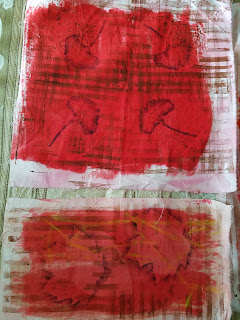 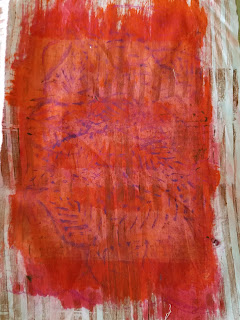 This piece didn't turn out so great.  I was using the Inktense blocks and rubbing over some leaf plates.  Nothing exciting, but I'm sure it will have another layer of 'something' added!

I have also been busy with everyday stuff, outings with my friends and dinner out!  A lot!!  Bob's only golfing four days a week (he used to golf 6 days a week!) so now he wants to toot around and have a late lunch or early dinner out!  Well, no I don't argue with him!  he he he
I met up with some art buds last week and we surprised Kay with a FaceTime visit with Mary Stori!  Mary has been trying to get to Florida to visit and play but with air flight issues trying to get somewhere "from here" has prevented her from heading south.  It's not easy traveling from her home to the airport let alone to get to where we are. But who knows...maybe someday...and until then..FaceTime works!


lkjljljlj
Posted by Robbie at 6:30 AM 5 comments:

I guess I should thank my former employer, EDS and/or my mum for giving me the project management skills I have. Thank goodness for that!   I try to be organized and meet my target dates 99% of the time (my followers know about the one target date that I missed!).
Anyway, I made a few fiber cards last month knowing that I'd be busy with tooting around with friends our last month in Florida. I didn't realize at the time I wouldn't be doing any sewing!

I do have other BD's this month but they will have to settle for regular Hallmark greeting cards!  HA  I  foroet to take a picture of the card I made for Sally.  It was on silk duponi and free motion quilted.

This is the fiber card was made for our friend, Mac.  He's the 1st row/seat on the left.  Mac was an All Star at Michigan and I just happened to have found this picture on the Internet. 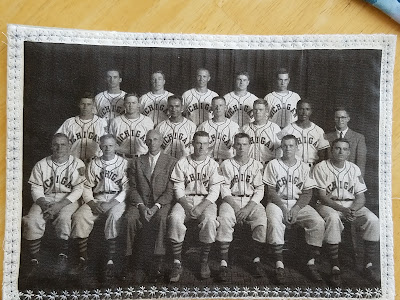 This is the back of his card.  I hope he enjoys it and his BD, which was on April 10th! 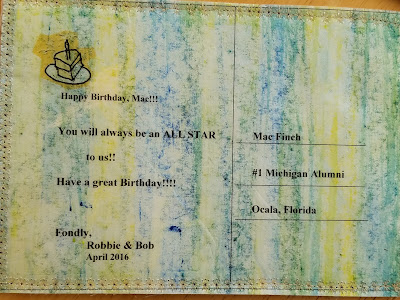 At least with not doing any hand work, I'm able to revisit my online dog classes, which Gigi, Kalee and I all need!  Hard to sit still but I'm taking advantage of this time to watch the video's and get back to dog lessons!  I am headed out today with Sally to have some lunch and visit a gift shop or two!   At least I can still shop with one hand!
Posted by Robbie at 6:00 AM 4 comments:

I will be back! 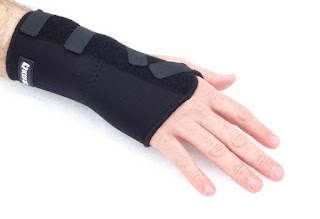 Well, I hope I'll be back!  HA....My wrist/hand have been in a splint wrap for over a week. (And, no, that isn't my hairy arm in this pic!).
I had Bob go with me to Urgent Care 10 days ago..I honestly thought I had cracked a bone.   Anyway, after x-rays and $$'s spent, the diagnosis is just degenerative arthritis/RA!

The constant pain is now only about 50% of the time or if my hand/wrist turn a certain way (like I did last night in bed!!!) or if I try to lift or even wash my right side with my left hand, the pain is intense!  By the time I get out of the tub at night my wrist is killing me again.  So frustrating....I did try to do some hand stitching the other day and if I hold my hand just the right way on the hoop I can do it!

Today, I actually groomed both dogs!  I put a rubber glove over my splint and the pressure didn't feel so great but the dogs got a well needed bath!  It's amazing what all you can do with one hand!

Jan M. gave me some coconut oil pills and Turmeric tabs which I have been faithfully taking!  Then my sister sent me some essential oils, which I have been rubbing on all my joints!  Next up, Jan also recommended Blue-Emu cream, which I bought yesterday and put on a few times a day (like before bathing dogs! and at bedtime for sure).  I can't say what is or isn't working as the pain is still in the wrist and thumb but I am able to move my thumb a heck of a lot more than I could a week ago!  So that's progress!  Right! I think so!  I'll take any little sign of relief!
Posted by Robbie at 6:00 AM 11 comments: