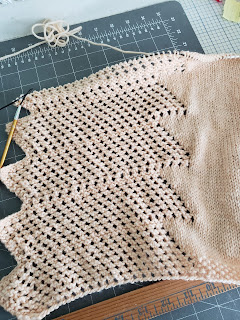 The color of this poncho looks sick here but it's a very pretty peach color in person...yes, I am knitting a row or two when the dogs aren't on my lap or I'm not in the sewing room working on Nick's quilt! 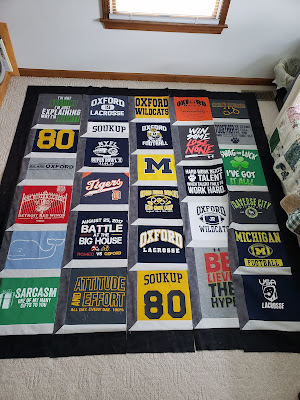 I really need to lay this out in the living room or downstairs family room!  I've added borders on the outside strips and each of the other three strips will have a black strip added on the left side of each block.   I'll use that strip to join each strip to one another!  You can see this process, which I've used before, on The Quilting Edge blog site.  This process works SO great and makes it so easy for quilting.
You quilts each strip separately so with the strips only 15" wide, it makes it easy to quilt.  Once you add the 'joining' strip process, you're sewing/quilting at the same time, so again, the process is so much easier.  These T-shirt quilts are HEAVY!!!
\
And just to put a smile on your face, this is our great grand daughter, Rilynn!  She has this expression in almost every picture we see of her!!!!  Now if that doesn't make you smile, you're a grouch!  HA 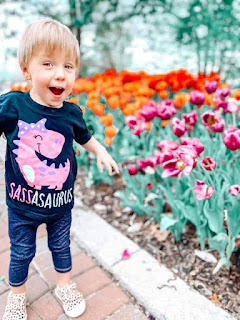 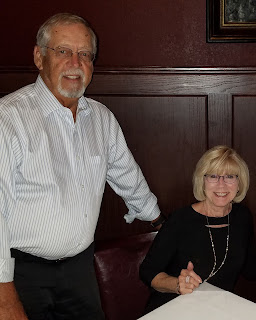 Why has our life has been busy the past six weeks?  Well, blame it on my hubby!  Early March he told me he had a "lump" in his groin and, also, that he's had it for over a year!  Oh, and it was the size of a golf ball!  No kidding!  It was that big!

WHAT! Needless to say, I freaked out, did my normal "why wouldn't you tell me or the doctor(s)", etc.  So I finally got him to go to the doctor and after many scans, biopsy, etc. we got the diagnosis of Non-Hodgkin Lymphoma.  That was a scary time for sure...so about a week ago, after meeting with the Oncologist, Bob had a PET scan to rule out whether the cancer had spread to other organs.  We got the results today that his cancer is in Stage 1 and he just needs radiation!  I'm not using the word "just" lightly..he still has to go through radiation but it could be more treatment(s), including chemo, radiation and other immuno type therapy.  We are so thankful for this diagnosis as in many cases it can be so much worse!

We're meeting with the radiologist and their group the 1st week in May so we'll know how many weeks/treatments Bob will need.  We'll get through this journey together and are so lucky to have had so many prayers from family and friends!  Keep 'em coming!!! 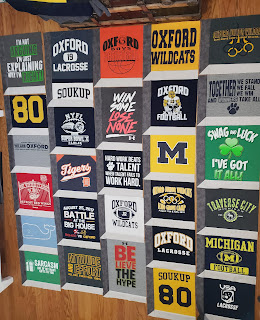 Oh my gosh...you would think I'm 90 years old and have dementia while working on the T-Shirt quilt!  I finally got the layout I wanted for the quilt blocks.   Looks simple but gosh, it's hard to get the strips/rows to look like you want and right now I may switch row four with row three! 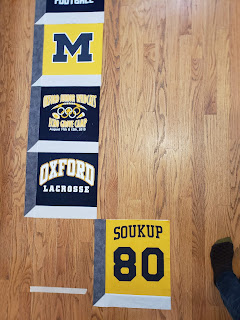 So next up, I need to get each strip/row to measure 77"...simple math, right!  But which block to cut and how much!  And about that 1/4" seam allowance!  Which I keep forgetting about!  So, this is what I did.  I took the shortest row and laid the blocks next to one another...then I put some masking tape on the top and bottom  to show the length I needed for the other rows (yes, I was working on the floor - and my back is letting me know that's a stupid thing to do!).
You see that #80 block...well, I bet it took me 20 min. to decide, after removing the bottom white piece, exactly how much I need to cut off the bottom!  Sounds easy doesn't it..but dang, it sure was a challenge for me!  HA 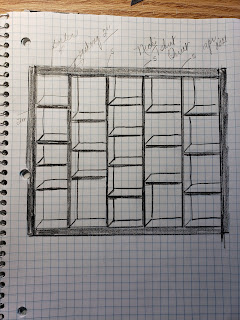 So this was my latest idea!  Yep...add a 2" black strip in between each T shirt block.  Looks good and I already know that I'm adding a 2" sashing in between each strip since I'll be doing the QAYG method.

So I cut some 2" strips from black fabric and sewed those to the blocks but then guess what!!!!  I forgot 3 strips have 6 blocks and two strips have 5 blocks...well, adding 2" strips inbetween gives me rows that don't match up length wise, again...so, I unripped 4 seams of the black fabric...ugh.... 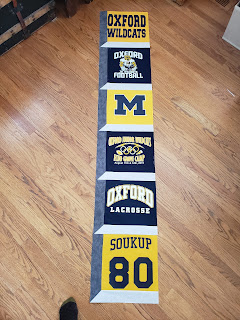 So no black sashing in between each T shirt block, which is ok.
I am still happy with this strip...there will be a 2" (minus seam allowance - almost had me, right!) in between each strip..again, that's to use for the QAYG method by Marianne from the Quilting Edge.  And I'll add a 4" border around the entire quilt.  I THINK!!!!!
Gosh, who knows until I get all those strips/rows done!  Then I'll sandwich and quilt each strip, then add the 2" black sashing in between so I can join each strip to one another.  Makes sense???
Too much math for me for one day!  So off for a glass of wine!  That will help...I think! 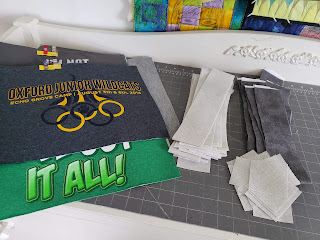 Guess where I went this past weekend?  Fabric shopping!  I don't fabric shop in Michigan and would only go while in Florida with my Q Bud, Susan!  I missed Susan being with me!  I didn't realize it's more fun to shop with a friend and get their advice on which fabric to purchase!  So I decided on for the shashing for Nick's quilt for the window pane and black for shashing inbetwee.  You can see the 2.5" strips and squares I have cut.  You need to get organized for this design...ask me how I know that!  HA 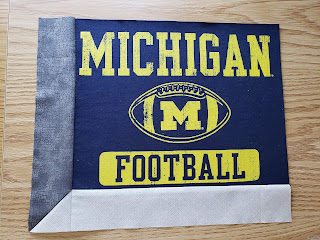 I am making progress on....slowly!  Holy smoke...I forgot how much math and effort it takes to make these buggers!  But I have to say, I'm enjoying myself.  It's been so long since I made a large quilt I forgot it is fun!  Well, the math part of this quilt isn't all that much fun but otherwise I am having a good time!  Of course, I'm making it more complicated than it needed to be but for my last T-shirt quilt, I wanted to do something different...so I'm adding the window pane or attic window design to each block.  This is what each block will look like. 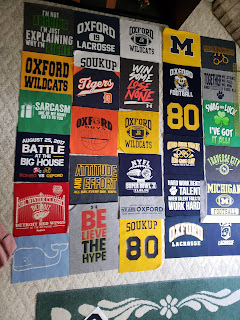 Sunday I worked on squaring up each block so I can decide how much to cut off each block so the rows are the same size!  Sounds easy, right!  First off I had to decide on the layout I wanted for the blocks...you know color does matter, right!

Actually, I've changed some of the blocks from when I took this picture. 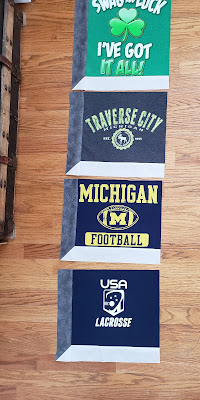 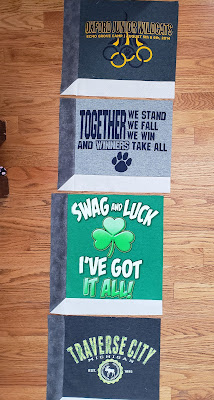 Once I have my 67" inches, then I add on the bottom white piece to each block then add the side piece.  I will be adding a 1.5" -2" black sashing in between each block and each row and of course top and side borders, which will be the same dark gray.
I was doing pretty good but cut a block or two,  too much and I'm short 1/4" on one row!  Grrrrrrr  So back to the drawing board and I'll see which block I can exchange with another row.  The 3rd row blocks are less than 13 inches which is what the block width is for all the other rows.  Some T's were cut short when first cut apart...wonder who did that!  HA
It will be a different T-shirt quilt design but for my final one I'm glad it will be different and I hope Nick likes it!
Posted by Robbie at 7:54 PM 4 comments:

Yep..it's that time again.  Our grandson, Nick, is graduating this year so grandma needs to get busy on his T-shirt quilt!  This will be my last one for grand kids!  They'll have all graduated from high school...thank goodness and I'm not making any for when they graduate from college!  Enough for me. 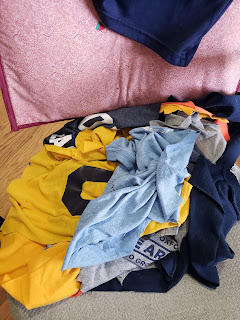 First step is sorting through all the T's my DIL gave me. 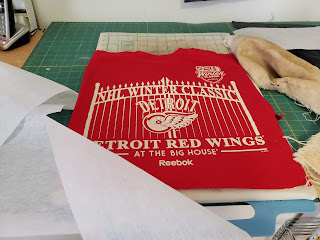 Next up is fusing interfacing on the back of each T after I cut away the sleeves, etc. 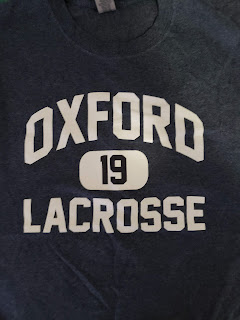 Now to square them up to size...well, I should say sizes...not all are large and some are larger due to all the writing on them. 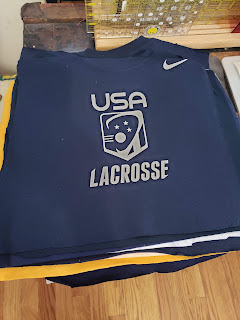 Between football, Lacrosse and different events Nick has been in or attended, I think he'll have a good mix of T's.  Now to determine the layout...I'm thinking of something similar to attic  window just to be different for a t shirt quilt.

And I get to go fabric shopping for the border and backing!