What a nice Easter day we had with the kids. Great food, conversation and fun! It was SO nice to have the kids and us together for the morning. I haven't seen them since we got back (except for the little ones and Kris). So here's is Nick at the beautiful table Kris had set. Nick took off his good shirt so he wouldn't get syrup on it! Now there's a good mind! 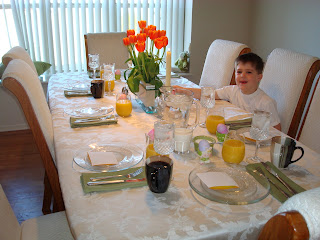 And here's the food we got to eat. Actually, there's more behind all of this picture you can't see like waffles, blueberries in syrup, fresh fruit, etc. Really good! And check out the cinnamon buns! YUM! 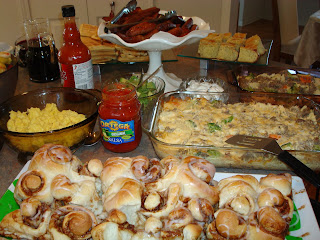 Nick made Grandpa his egg. He wanted red dye but ended up with pink. That's ok, I told him pink was grandpa's favorite color! He didn't believe it either! 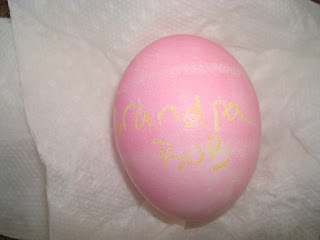 And Amber made my egg. We actually ate them for dinner last night! I made egg salad sandwiches (minus yolk) for dinner. We really weren't even hungry with all we ate in for breakfast! 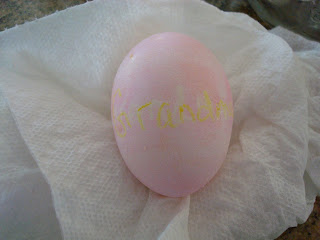 And here's a beautiful plant Dawn and Jeff gave me! It's too pretty to put outside (and too cold!) so I'm enjoying them inside right now! Aren't they just so vivid in color! 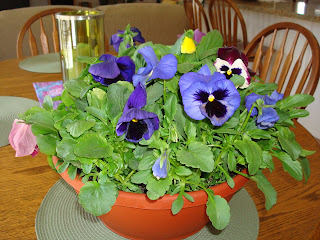 Kris and Darrin got me this tulip container. The bicycle plant holder is cute too. That will make a nice addition to the deck or out front. Plus, I needed more tulips to plant outside so these will be perfect! Of course, there's always a mishap at dinners or get together...so it was Grandma this time. The bowl of blueberries dropped from the frig and landed, guess where! Yep, on my pants. Amber took the picture and did a good job, didn't she! And yes, with some Oxi Clean and Shout I got all the blueberry stain out! Guess I could send before and after pictures to each company! 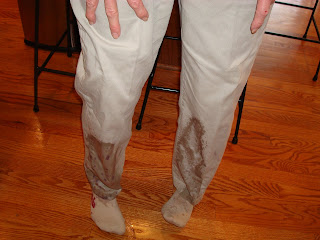 Auntie Dawn got each of the kids their Easter 'basket' which contained one of their favorite things - Tattoo's! Hopefully, they'll get this phase out of their system with the fake ones and not get any real ones! Hate to see them on the folks in the nursing home(s)! Here's Amber putting on Nick's tattoo! They took turns doing each other. 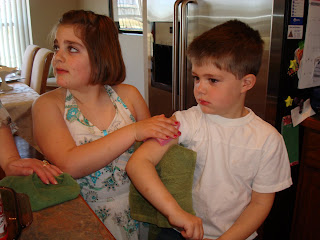 And here's Amber's tattoo on her back. It does look cute and it's washable! YEA! 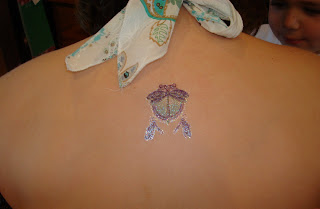 Here's one of Nick's tattoo's. I think he put on 3 or more as did Amber. Grandpa told him when he starts to wrestle he needs to put those tattoo's on to intimidate the other guy. Nick wants to go into wrestling. Hmmmmm 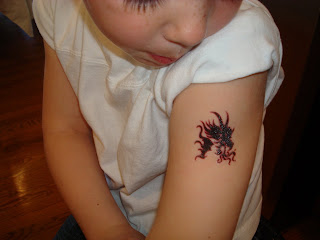 So that was our day and it was so nice! I really just want to sit back and watch and listen to the kids when I'm there. I love them all so much and enjoy being with them. Now a days every one's schedule is so busy that I feel like I'm just adding to their already busy schedules to plan a get together. Maybe I just need to do that anyway.
Posted by Robbie at 8:21 AM