The Frogs Are Traveling! 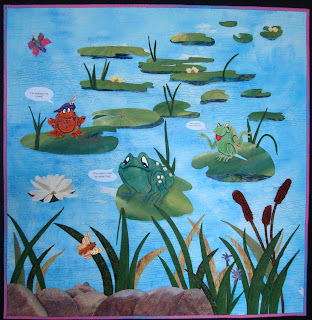 Whoopee! I'm really excited that my frogs where juried into the SAQA (Studio Art Quilts Associates) A Sense of Humor exhibition! The 'frogs' will travel to Houston this fall, then on to Chicago in the spring of 2010 then to California in summer of 2010! All of the juried quilts will be on exhibit at the IQA's (International Quilt Association) shows as part of SAQA's exhibit. Here is a list of the other lucky folks whose work was also accepted:

Pam RuBert was the juror for "A Sense of Humor," which will premiere at the International Quilt Festival in Houston in October. Curator is Pat Gould.

And speaking of frogs...each year in late February or early March, we hear loud (and I do mean loud!) frog noises each night. One year the back yard was covered with baby frogs! This year the frog noise wasn't as bad but still quite loud. We're still hearing them at night but haven't seen too many of them in the yards. This little guy was on the front glass door about a week ago. He sat on the storm door for the longest time and finally moved his little legs close to his body just after I took this shot. Guess he was in for the night! His body is so translucent looking that it's kinda weird looking! Or down right scary! 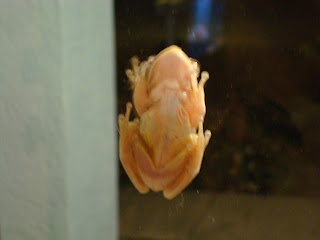