It's been overcast for 2 days now! So unusual for Ocala but it's still 54 out and supposed to get up to 60+, although, it's almost 1 p.m. so not sure it will make it. Still beats the snow, so we're happy! Bob's off golfing and I'm still working on my frogs! That's a whole other story!

A few years ago, Dawn purchased some very, old quilt blocks at a flea market. She kept them for several years but after getting into her photography work decided to part with them. Rather then give them to some 'stranger', I put them in my sewing studio for safe keeping! Last spring, before we left Florida, my friend Susan said she had always wanted to take some old quilt blocks and make something from them. Susan had given me a pattern she made of a leaf (which I loved and I did make a quilt from it) so when we returned to Michigan last spring, I sent her the Dawn's quilt blocks! Here's what Susan did with them. You have to click on the pictures to see as much detail as you can. Susan does beautiful hand work and you almost have to see the work in person to appreciate it.

These are some of the blocks Susan had to work with. 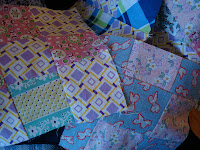 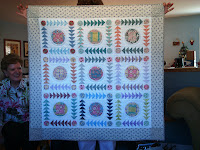 Here's a closeup of one of the circles. Note the hand quilting! 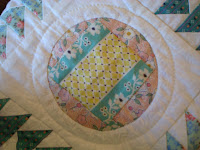 And because Susan felt guilty cutting up some of the blocks, she decided to make another quilt using just the blocks themselves. She didn't hand quilt this one but tied it instead. It's still quite nice! I think they are both great pieces and so wonderful for her to have and appreciate. Glad someone took good 'care' of the blocks and made something from the heart with them! 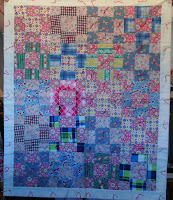