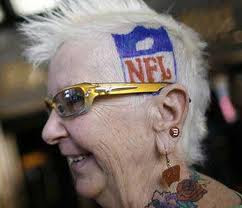 No, this isn't me (yet!)...last night Nick called and grandpa answered the phone to hear Nick say he got his first touchdown in Flag Football! Bob quickly congratulated him and handed me the phone. Nick was quite excited as were grandpa and myself. Darrin said Nick has been practicing his drills all week and it paid off. Coach said Nick is really fast and he's was shocked to see how well Nick did his drills! So congrats Nick!! Keep up the good work!! Grandma will be at your scrimmage next Wed. for sure (taking pics, what else) but I won't have the tattoo on my head! Bob said there's nothing like being involved in your son's sports life and I can tell that Darrin feels that way too. 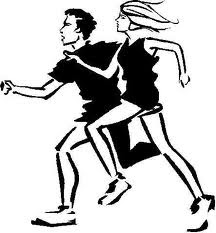 On another proud grandparent note, I rec'd email from Ron (another very involved dad!) on Ian's cross country stats. Ian is only a freshman but he's giving his upper classmates a run for his money! Here's the note:

The news article for another one is listed below. Ian took 118th out of 177 in the varsity race. Only 14 freshmen beat him. There were 32 schools. If you include all the runners (307) Ian took 137th when looking at both the varsity and JV races.

CONGRATS to you both!!!