The good news/bad news came from our grand son Nick..good news - he lost his first baby tooth! Bad news...as Nick was coming out of the shower, he told his mom he doesn't believe in the tooth fairy! AND, he also doesn't believe in Santa Claus or the Easter Bunny! Sigh....guess that TD he got in Flag Football has erased all baby thoughts! My DIL said he did try to recant as she was putting him to bed...guess he had 2nd thoughts about the $$'s!
Back to artwork..I was 'doodling' this small hard canvas piece and decided to put some watercolor on it..which of course removed some of the gel pen doodles I had done. I just went over some of the areas again. Actually, didn't turn out that bad. Good practice.. 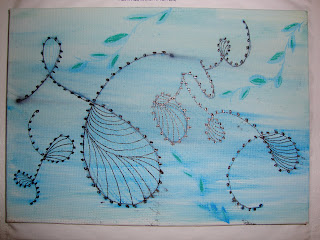 Yea...just like if I find a blouse or T-shirt I like I buy multiples..when I find a zentangle design I like to do, I do lots of them! That's a good thing as it makes it easier to remember how to do them. I keep a journal book and put in the designs I like as a reference. This is the front of an envelope I did. 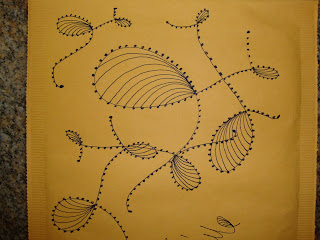 And another edge to an envelope... 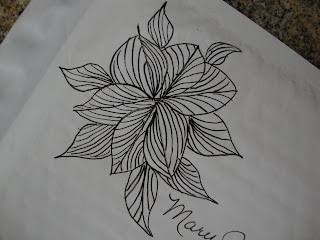 I mentioned at the MQAI opening there were some vendors so I wanted to share two of my 'buys'. This is a great purse made by Cindy Geist from Scrap Happy . Cindy and Mary Bajcz make some really cool items. Check out their web site. 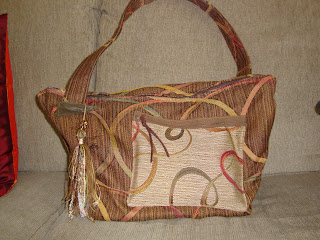 And this is my artwear I purchased from Lynn Hartley. Lynn doesn't have a web site that I can find. I'll have to email her to see where she displays or sells her jewelry. I purchased a pin from her about four years ago and I keep it on my muslin coat. Now I can switch pins. I also bought a pair of earrings but forgot to take a picture of them. 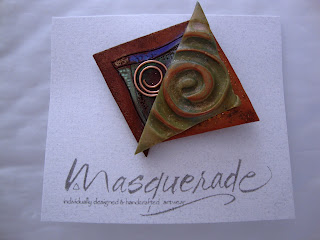 Yesterday Bob and I attended his presurgical conference which I have to say was really informative! They covered everything from pre to post operation..what to expect, what to do and what not to do. As a 'coach' I even got a giant pin! They really gave us some food for thought as to what chair to sit in and how to get out of bed. It's obvious they'll cover that after his surgery but better to know some of that ahead of time. The room was packed and we were shocked at the number of people having either knee or hip surgery...actually, there were more knee surgical patients than hips.
Today, running errands. I'm finishing up the beaded edge on my Aug. BJP so hopefully i can get pics posted tomorrow. Then on to Sept. to try and catch up!!
Posted by Robbie at 8:11 AM