Doodles and what not 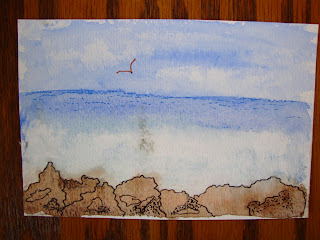 My friends Mary and Carol T. were in Charlevoix, Michigan last week to pick up the quilts from the MQAI Italy exhibit that has been traveling for the past two years. In between, drinking, eating and being tourist, they played with making watercolor postcards which they sent to me. The one on the right is from Mary and the one below was made by Carol. Aren't they cool! 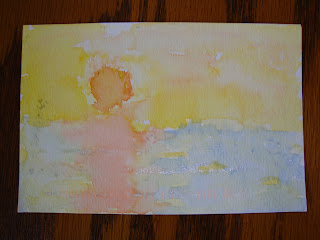 I'm going to keep them with my fiber art postcards and ATC's. I think they both did a great job!

Not sure if I've shown on my blog the quilts I made for the Italy exhibit in 2008. I made a thread drawing of Leonardo DaVinci. Kinda tricky as I wove part of the background fabric after I had traced his face onto the fabric. Cutting just up to the edge of his face and hair! 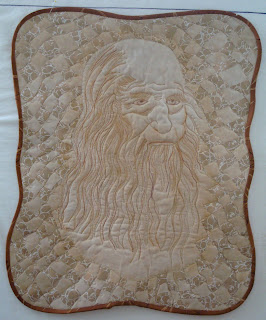 At the time, my daughter had traveled to Italy twice so I made a quilt for her which we just showed at the opening. I took her pictures, newspapers from Italy and postcards and transferred them onto fabric. I edged most of them with a hot glue gun allowing the glue to melt onto the edges. Yes, hot glue gun! Look, I won't be here 100 years from now so do I care if this quilt holds up! No one will even know who 'mum' or 'Robbie' was so who cares. Dawn has this quilt hanging in her kitchen/dining area. It looks pretty cool hung up. 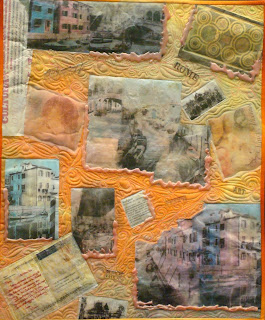 My friend who now lives in Italy had her quilt for our South of the Border exhibit in the Flint Journal so I mailed her the newspaper. Thought she'd enjoy reading some English rather than Italian in a newspaper as well! So to 're purpose' an envelope I had...I just stenciled on one side and.. 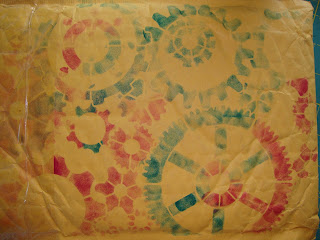 Just adding some doodling on the back side. Keeps our local post office amused. 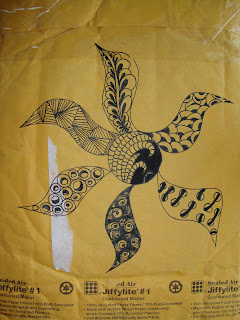 These are the two quilts that were featured in the Flint Journal this week advertising our show. The Tango (left) is by Carol Wineman from Ann Arbor and the The Village is by my friend, Lois Ann Fulton, who now resides in Italy with her hubby (she's the lady I decorated the envelope for above). Pretty cool art quilts aren't they! 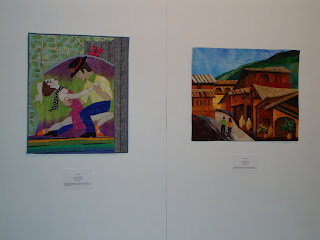 We hung the 60 quilts for the MQAI - South of the Border exhibit yesterday. It was so interesting to see how cohesive this show is! Some years you have to put your thinking cap on as to which piece is hung next to which piece. This year Mary and Marty didn't seem to have any problems as the pieces just went next to one another! I'm the nail pounder! I have my sturdy hammer, nails (in my wrist magnet hubby bought Mary and I!), my ruler and off I go.
Tonight we're meeting our friends Carol P. and Tony for dinner. They now have an apartment in Michigan for the six months then back to Ocala for the other six. Tony has golfed with Bob once since they've been here and Bob's hoping he'll get to golf with him again before his surgery! Tomorrow is the opening reception for our South of the Border exhibit so I'll be eating dinner out again! Oh, the life of a retiree is so strenuous sometimes...but someone has to do it so guess I'll tough it out!
Posted by Robbie at 1:15 PM