Weekend with the grand kis!

A busy weekend for grandma and grandpa (ok, so only for grandma!). I picked the kids up in a quick exchange at WoJo's parking lot on Sat. @ 11:30...kids and I took off to the library in Davison to pick up some books and a DVD for each (grandma has to have some coffee time to rest..hence, they/we watch a DVD!). Then we went to the Festival of Flags in Davison. Actually, it was just amusement rides...I never did find the art fair or car show! Not good signs around for sure!

After the library we parked at the festival and kids ate in the back of my car. Kris packed them a lunch so that worked out very nicely. Kids got to pick five things to do at the 'fair'. Nick rode 3 rides and played two games; Amber rode two rides and played 3 games.

Here are the kids eating in the car. Not exciting but we have to journal our adventure from the start! 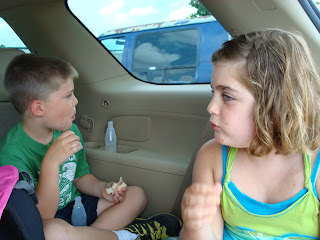 This was one of Amber's ride...she didn't feel so hot after riding it..hence, she only wanted to ride two rides! 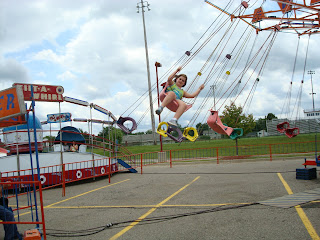 This was a ride they did together and they really liked it. Nick rode by himself once too. It started off flat then lifted up and went backwards. Cool ride but not for this grandma. 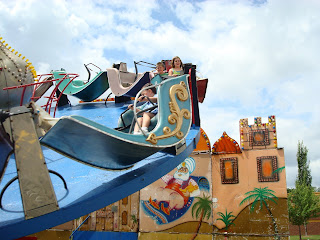 This was Nick's other choice for a ride. He rode it all the way up the entire time. 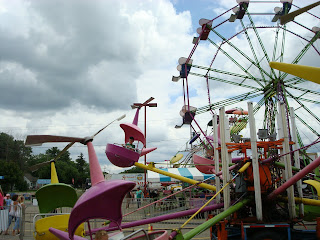 Nick on the ride by himself. He said the lady behind him kept "screaming like a girl"...hmmmm wonder where he heard that before! 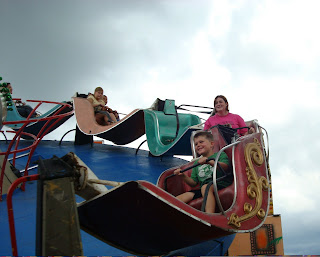 So after the festival and a quick stop at Kroger's we headed home. Kids did some painting and stamping then it was time to 'rest'. OK, rest for me! So downstairs we went and popped in video, Herbie the Car or something like that. Cody was visting for the day and the kids really enjoyed him. Here they are all resting! 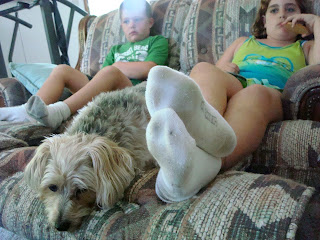 Nick switched seats and Cody followed. He shared his time between Amber and Nick. We did take Cody and Mandy for a walk as well. Poor Cody was pooped by the time he left Sat. night! He actually got tired of playing fetch with his ball! I've never seen that happen before! 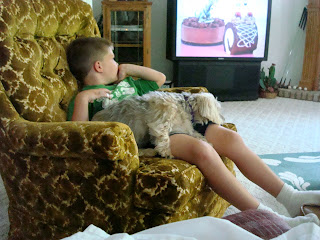 Next we decided (who decided??) to play dress up. Nick picked out a shirt of grandpa's along with a belt and pair of shoes..of course we had to add a moustache and beard! He looks more like a muscle man here! Cody is at Nick's side just waiting for him! He followed the kids around a lot! 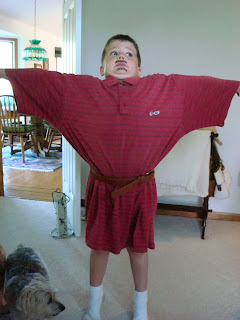 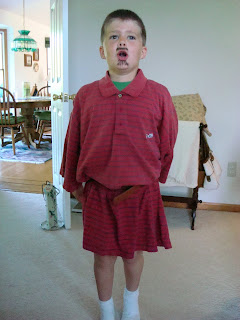 Of course, Amber was our beauty queen! Isn't she special! 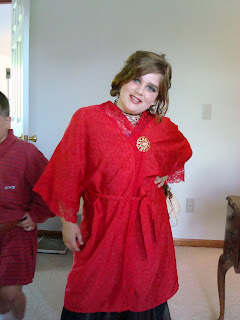 And our second outfit! She had lots of makeup on as well..but no beard! Whew! 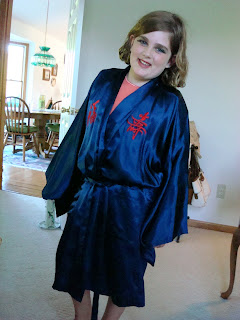 After bath time and treat, we all finally went to bed! Grandpa and I were in bed by 10 as well! In the morning the kids made breakfast. Nick made scrambled eggs (Egg beaters) and Amber made pancakes! They were being watched carefully on the stove and they did a good job! 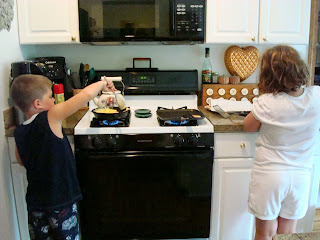 After breakfast, we went to the Farmer's Market. Amber didn't know it was outside! She thought we were going inside to shop. A little surprise for her! It did start to rain a little bit but kids used the umbrella. It didn't last long and we saw my friend Mary and her great, grand daughter Carmella at the market too! In fact, I had to bum $5 from Mary! I ran out of money and I wanted to get some granola. It was a Maple Cherry granola from the Bake shop & coffee house in Owosso, Michigan. Really good! We also tried 3 different types of honey and bought 'starthistle honey' by JodiBee Honey Farm in Clarkston, Mi. Also picked up some lemon honey creme that is delicious which is made by JodiBee as well!! Can't wait to try this on a bagel or on pound cake (which the young man suggested).