What can I say...old folks eat out a lot!  Guess that makes me old!!  I already posted on our day at the Freezer Tiki Bar....now to fill in a few other days! Bob and I do take off and eat out by ourselves once a week or so.  We stopped at Harry's last week for a great meal!

I had Chicken Taco's prepared New Orleans style and they were fantastic.  Bob had Shrimp and Scallops which he enjoys. Of course we started off with deep fried pickles and ended up with Banana Foster Bread Pudding, which was to die for!  We always get Bananas Foster but the bread pudding version was terrific! 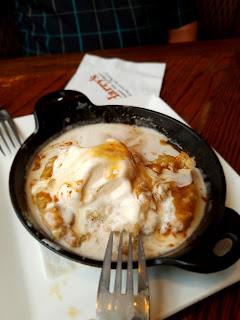 Then on Thursday, the gang met at the Ocala Palms Cafe for dinner.  I enjoyed my meal of salad and Buffalo chicken flatbread.  I only had 1/2 order and it was delicious.  I ate all but one piece (gave that to Bob to try).  It's a dish I would order again. 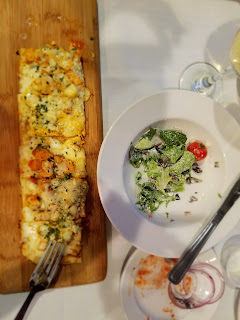 Bob had chicken, parm, which he said was good but not fantastic.  But the onion rings were good...I know..who orders onion rings with chicken parm!  Hmmmmmm 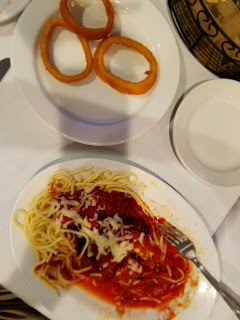 Others had burgers and a few had  chili Nacho's or chicken Nacho's, which both said was very good.  All in all...a fun night chatting and enjoying friends and food! 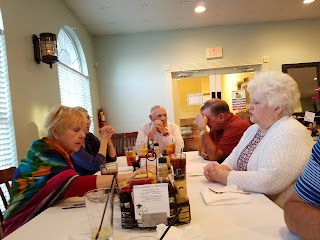 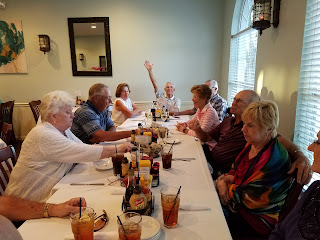 And this past Thursday, another get together with the gang at Mimi's!  I had quiche/salad and one of their fantastic blueberry muffins.  Bob and I had the other half of the quiche for breakfast the next day! 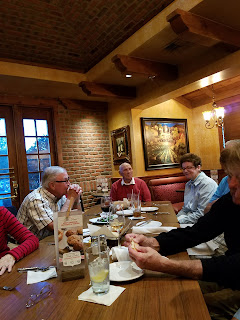 This was Susan's chicken dinner!!  I believe Susan said those were scalloped potatoes in upper left corner! 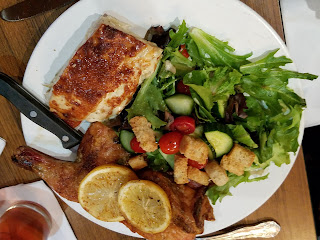 I promise to show some textile work soon!  I am doing some work.  Until then, more food adventures will be forthcoming!  Like I said...that's what we old folks do!
Posted by Robbie at 7:35 PM