How about a slice?

Our first one was in 2011 called To Market.  We were each given a photo that Tommy had printed out in the size we needed to create.  There were 16 of us! participating and Tommy also provided  batting and backing.

This was my completed section. 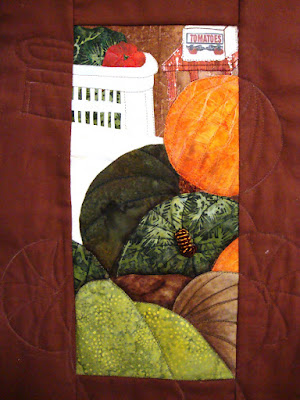 Why, yes!  That is bead for the little knob on the mellon!!!  I also printed out the little sign on the right top side onto fabric then stitched in the quilt.


And this is the full quilt.  Amazingly each section just fit!  And Tommy did a great job putting it all together! 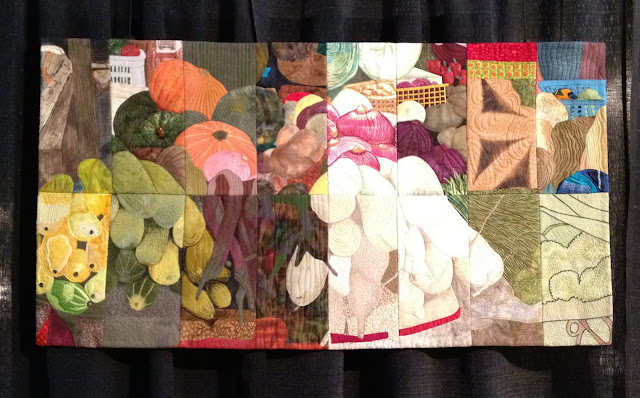 In 2012, Tommy once again was 'game' to put together another slice project!  This time there were only 10 of us.  This slice quilt was called A Street in Ireland and we were accepted at the Houston IQA show that year!  Woohoo!   We didn't win but as they say, it was an honor just to be accepted!

Once again, the slices just fit so well!  This time Tommy kept each piece as a separate panel so we could each have our piece returned after the IQA show.

This is a picture of my quilted section on the left and the picture I worked from on the right.  Below are some detail pics. 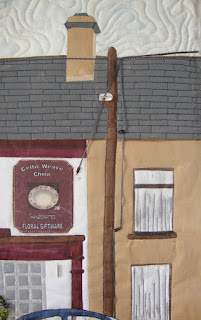 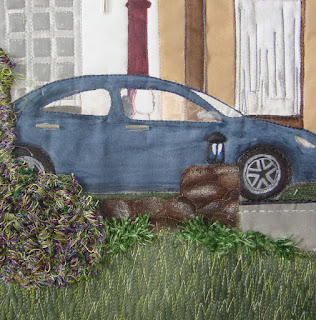 Really fun to work on...yes, a little nerve racking just because you are passing on your work to someone else!!  But I would do again! 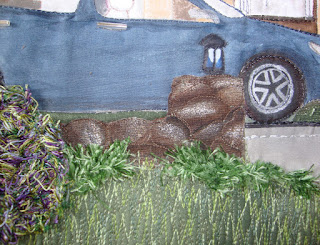 In fact, back in 2008, our Aussome Fiber Group created Underwater Fantasy which was a color study done by six of us.  We did a random draw on selecting a color from the color wheel.  We could only use that color/shade along with black or white.  Mine is the blue colorway and it was tough to work only in one color!  But we were juried into Houston that year as well. Double woohoo!

This was my section....and a detail pic of the turtles.  I printed out pictures of turtles then painted and used a dimensional paint to get a rough shell feel and look! 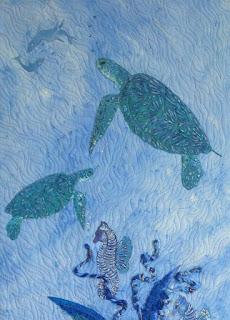 Not sure if you can see the sign in the picture above...bottom right side corner...it says 'equestrian zone'....for the sea horses!  Clever, I know!  HA


So if you are looking for a challenge for you and some buds...do think about doing a slice project  I have some documentation for guidelines I would be happy to share...not a big deal but you do need some guidelines.  It's a great way to create something special.

The first slice quilt we did, because all the pieces were sewn together,  Tommy just put all the names in a bowl and drew out one name.  She has the quilt...lucky Gayle!
The 2nd quilt and our UnderWater Fantasy we were each given our piece back.  You just don't sew all the sections together.  Works out well!..Give it a go!
Posted by Robbie at 6:00 AM