On Sat., Mary, Karen and I went to Grand Rapids for the opening of the 'Musings' SAQA exhibit that Mary was co-curator on. The show was at the Gerald Ford Museum and it was wonderful! My 'musing' piece didn't get juried into this show but I can see why! The quilts were spectacular!! And I mean spectacular!

This was the fountain at the front of the museum. It wasn't on when we first went into the building but was on as we were leaving. A nice mist came off of it which was quite nice for folks that were sitting around it. The day was warm and beautiful! 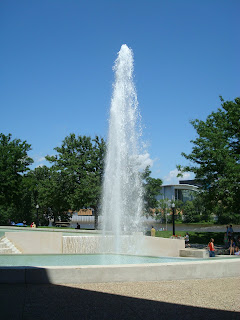 This was inside the museum looking out at the fountain. The building is quite nice and the exhibits are as well. Carol T. and I, a few years back, stayed at a hotel right around the corner when we attended the fiber convergence. We did go through the museum and saw most of the exhibits. It's certainly worth the trip to go back and see facts and memorabilia of President Ford and we got to see the doll collection from Carolyn Kennedy. 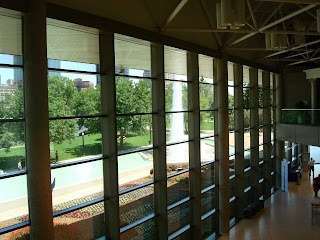 This was the large poster sign at the front of the building for the Musings exhibit. Isn't it great! They also had several throughout the museum. I think it's a great poster for fiber art work. 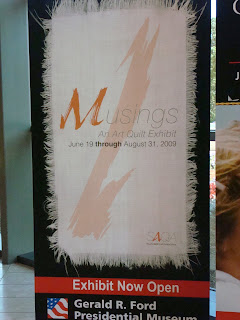 Oh, this was a shot of some buildings as we were coming back from lunch. I just love the blue looking buildings against the blue sky. 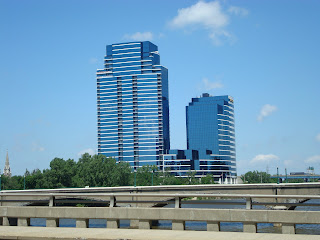 Another building along the water...which was quite brown but I don't think that's any different then my last time here! The water was moving quite rapidly! 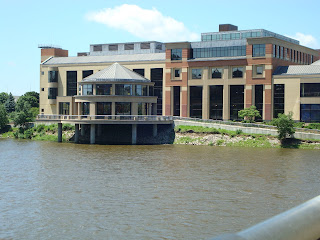 OK, so here are two 'tourists' checking to see if anyone is still inside this rocket! This particular rocket was used in training the servicemen to rescue the astronauts. Only problem was this particular one they couldn't find! I think it was Russia or some other country that did find it and returned it. Now it's on display in GR. That's Karen on the left trying to see if anyone is home. Mary is on the right. 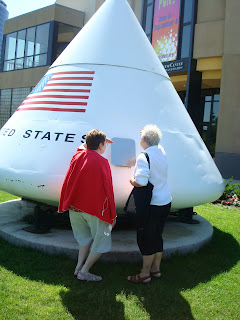 So, as I said, a few years back when Carol T. and I stayed in GR, we ate at the Sundance Grill about 3 times! The food was great...and the restaurant was still there within walking distance of the museum. So that's where we had lunch! This was Mary's corn soup which was really good! We got to sample! 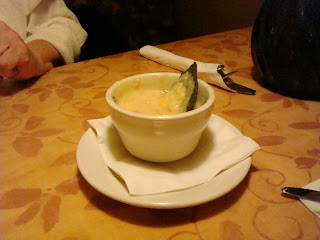 I was so hungry I forgot to take pics of our lunches. Karen and I share fish taco's which I've never had but I would again. They were quite tasty. Mary had a southwest chicken wrap which looked really good and must have been. She didn't have any leftover to take home! Well, guess I'm just as bad..yes, I ate my 1 1/2 fish tacos and had room for dessert! Which was Key Lime pie and I ate the whole thing! But I did have one small piece leftover for a picture! 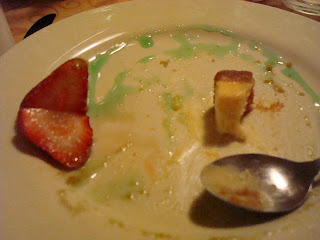 Karen had cheesecake which was so HUGE! She has her hand next to it so you can see how large it is...but guess what! There wasn't any of it leftover either! Shame on us! But we did walk quite a ways so that was good! 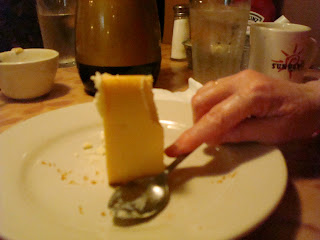 Oh, I did have this little black bean that was leftover...I thought the picture was interesting as you can see his tiny shadow..ok, I amuse myself, what can I say! 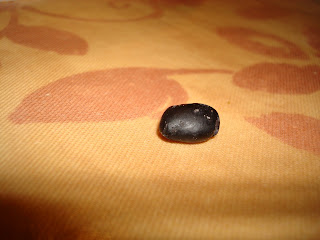