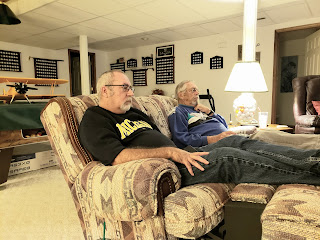 We had such a nice weekend!  Ron, Bob's son, came to spend the night Saturday while MaryJo had a sister's weekend in Oxford.  Worked out great so Bob and Ron could yell at the TV together while watching college football!  Michigan did a great job so there were happy faces...doesn't look like it in this picture (I have to sneak taking pics!).  It's always fun to have the kids here and Ron and Bob are great at the banter and cheering on Michigan! 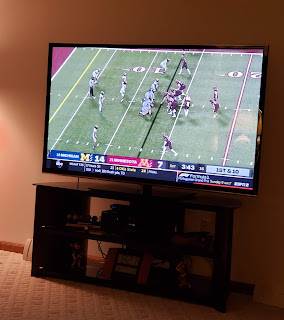 It was a good game to watch..although I was knitting and would get thrown off counting my stitches when either Bob, Ron or the announcer would talk about yardage or scores...I would be counting stitches and someone would say "19" and I'd think...hmmmm thought I was only on 15 stitches!  Yep..I did a lot of recounting! 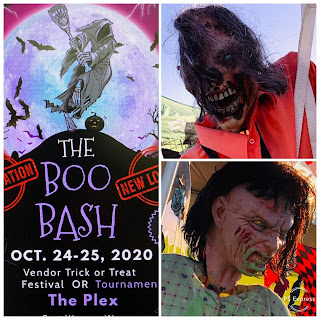 Darrin and Nick were at the Boo Bash Lacrosse weekend in Indiana!  They were in Ernie, PA last weekend and now this past weekend!  Yes, they get Covid tests often!!  Nick scored several times this weekend...and had a few assists as well.  He's really doing so well at Lacrosse.

And we received news last week he's been accepted at Lawrence Tech U, for engineering (here in Michigan) and was also offered a spot on the LTU Blue Devil's Men's Lacrosse Team.  His official signing is planned for October 30th at LTU with Coach Nemzek, mom and dad.  So excited for Nick! 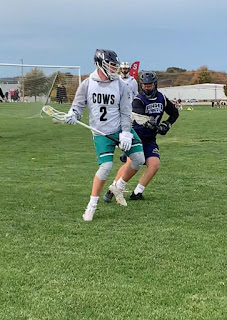 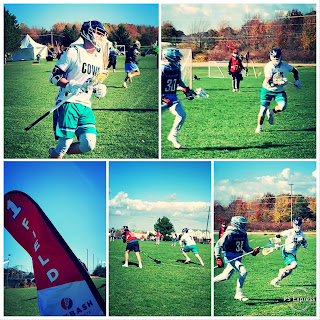 Darrin said Nick has really increased his speed running the field and he's playing better since he's been accepted to LTU! 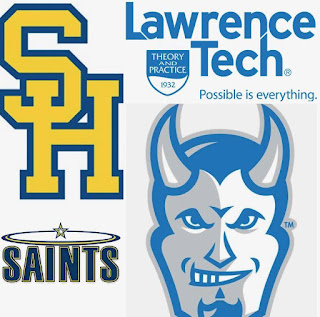 Darrin sent out this picture....he said "this now means our house will have a SAINT and a BLUE DEVIL"...Amber goes to Siena Heights and plays Lacrosse (yep, she's the Saint).   Funny!

Bob and I raked 8 bags of leaves after Ron left!  We're way behind on raking this fall but the leaves haven't fallen that bad....yet...we had over 23+ bags (Bob's count) last fall.  Appears we have quite a few yet to go!