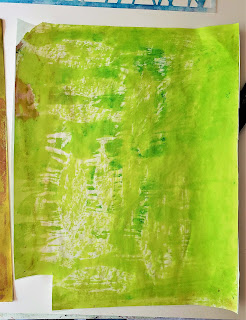 And she had an idea...yep, that gets me on a tangent from time to time...so I had an idea to create a background using one of my stencils...but first I had to decide on which color of printed paper to use. 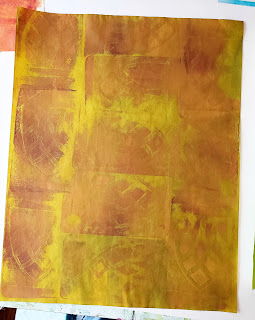 I stamped this with the arch stamp I made a few weeks back. 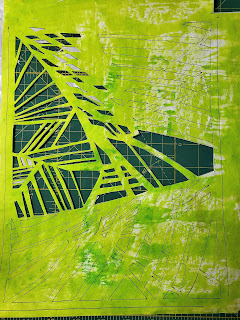 Again, this was just an effort in trying to create something from an 'idea'.  I just traced the abstract leaf stencil on to the paper (I had fusible web on the back of the green paper).  Then I carved out each piece. 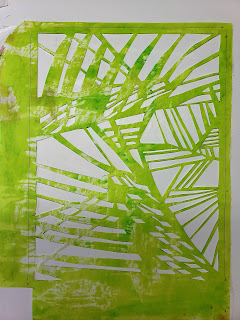 Stencil pattern all cut out! 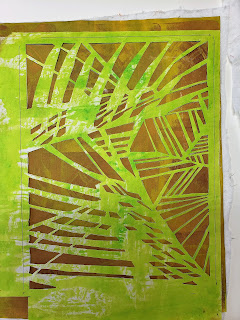 I fused the stencil cut on to my background piece. 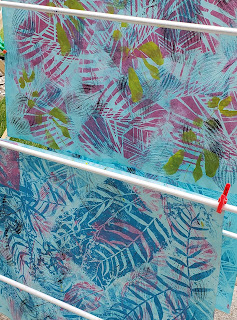 It's a little hard to see but this was actually my inspiration for making this stitched collage.  I used the same stencil on this poster board then I stamped with a real leaf.

Funny, but I forgot I had used a real leaf so I was digging in my stamp 'tub' and couldn't find the large leaf!  Well, duh!  So I just used a small leaf stamp I had. 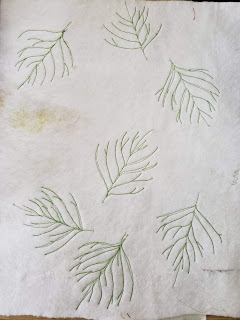 I fused the entire piece onto some batting and then free motion quilted the leafs.

Then I got another 'idea'...I didn't really care for the piece as a whole so I'm playing with the camera and slicing the piece to create a diptych!

This is the first so called 'cut' I did via photo program.

And the second piece cut.
Now to get the nerve to slice them!  But I'm liking the smaller versions.  This is practice for the 'idea'...you can see some of the lines I traced...just because I used a pen to trace and my cutting isn't the best!

Now to the next phase!  Whatever that will be!