Oh my gosh!!  I can't believe some of the shows I get hooked on....BUT....for some reason, I happened upon this show called Married at First Sight.  It's a show where several physiologists and therapists hook up three couples....AND they get married sight unseen!!!  They don't meet each other until they are at the alter and getting married!!  Can you imagine!!  No, I can't!!


Here are the three couples that just got married!  Holy Smoke!!! 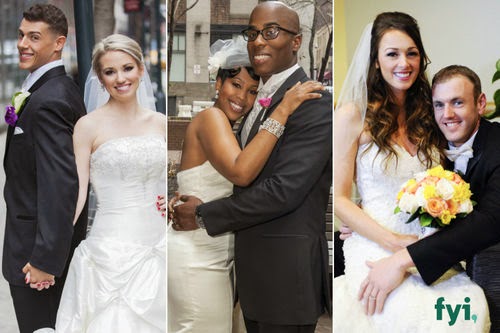 My favorite are the couple on the far left...although, I think the couple on the end (right) just might stay together!  I can't believe I'm hooked on this show!!  I was quilting the rest of my peacock quilt while watching this show.  Talk about silly...but I love it!!!  I don't watch trashy shows like...what was the show where they doing lie detectors to see who the baby belonged to!  After the fourth guy passed, I lost interest on who the baby really belonged to!   Geezzz...now that's trashy and I don't watch those...but I do watch Housewives of where ever!  Love those too...

So now I may or may not get a lot of sewing done...it's easy to just listen but dang, I catch myself watching most of it!!  So, I've gotta run now...I have the honeymoon week to watch now!
Posted by Robbie at 5:46 PM