What another great family time with had yesterday! Kids were in from Indiana along with dogs and it was so much fun!

Here's the 'watch dogs'! Ben, Cody and Mandy. They all got along SO well and are the best dogs around. 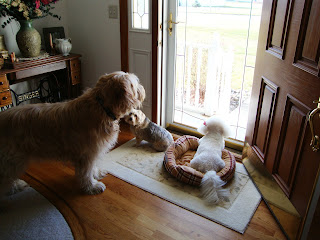 This is Cody and Gabe, Kayla's friend who came to visit. This is our 2nd meeting with Gabe and he's such a nice gentleman. Not such a good Monopoly Deal card player! But he was a good sport, so we let him win one hand! This card game is so much fun! A lot quicker then Monopoly. actually Ian, Kayla, MaryJo and myself (along with Gabe) each ended up winning a hand. 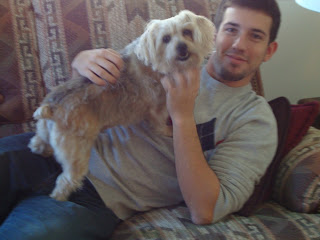 We combined Thanksgiving with a surprise 'pre' BD party for Bob. He turns 70 this Dec. 18th and I thought since kids were in town I'd invite Diane and Don (Bob's daughter & hubby) to join us for dinner. Just another surprise for Bob as he didn't know I invited them. Kids decorated the dining area before dinner.
Ian, Kayla and Gabe doing the honors. 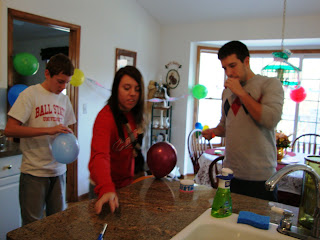 This was Ian's first time at tying balloons! We had a balloon tying session. The green balloon behind him has writing on it stating this was his 1st tied balloon. Ian is getting so tall! He's taller then I am!! 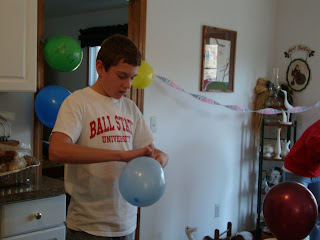 This was Grandpa coming up into the kitchen area! He was a bit surprised and didn't know what all the decorations were about! Yes, I got a lecture afterwards but it was worth it to have both his son and daughter and families together for a change. 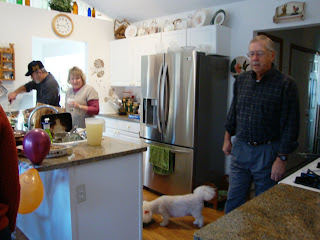 And a carrot cake for the birthday boy! 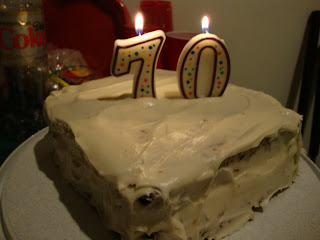 We were downstairs having dessert. Not sure what he wished for but it won't be heading to Florida early...although that's what he said he was wishing for! 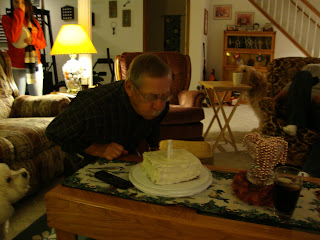 So that was our day and it truly was great to spend this week with family. I did miss seeing Dawn and Jeff as they went to Jeff's family for Thanksgiving but they did cook dinner for me this past date night so I got to spend time with them.
I am so thankful for the family and friends I have.
Posted by Robbie at 10:04 AM