Last week my bud, Carol, and I met in downtown Holly, Michigan.  Holly is (or was!) a small town where I lived  (BB - Before Bob! ha) and  both my kids graduated from Holly high school.  The town sure has grown!  Wow!  Parking in the street was packed at 10:30 a.m.!  Who knew! How's this mural on the side of a building!  Pretty cool! 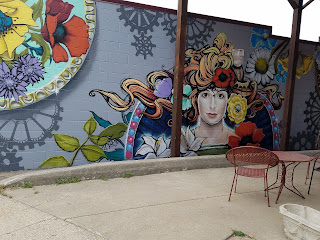 Anyway, Carol was looking for bubble  bud vases as a Christmas gift for her sister and Holly is known for Battle Alley and their antique stores.  So....off we went hunting for bubble vases!  I didn't know what they were either but we did find two of  them.  Actually, she found a third but it was eight inches tall so Carol passed on purchasing that one.  Hers are around six inches. 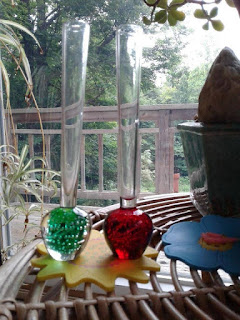 Carol and her hubby went out the next day and she found some more!   How's that for luck!  I think they are quite pretty and how the light hits them really enhances their beauty. 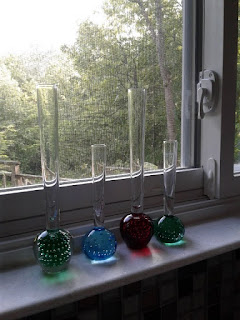 So, as we were walking around the Battle Alley antique mall, I spotted this picture of a former actress.  Do you recognize her??  This was actually a package of paper dolls....original price was over $20 for the package but marked down to $3.  Yes, I had to buy it! 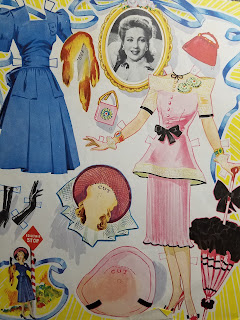 Finally!  I remembered!  She's Ann Southern!  Some of you 'babies' won't know who Ann Southern was.  She lived to be in her 90's and had her own TV show for awhile too.  I do remember her being so beautiful and had such a great smile!  Since I'm so fond of the old movies and actors I'm glad to have this package!   I'm sure when I'm gone my kids will wonder "what the heck was mum doing with paper dolls?"  Until that time, I will take good care of these paper dolls!
Posted by Robbie at 5:30 AM