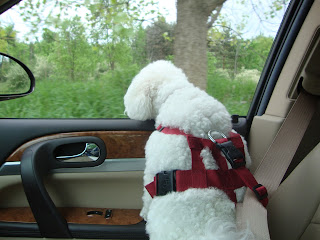 Kalee and I have been staying with the kids this week!  We had a good time...hope the kids did too!  This was Kalee waiting for Amber/Nick to get out of school.  She just loves the kids and cries when we pick them up from school.  What a hoot.  You can see more of Kalee's week on her blog here.

We did have some rainy weather on and off and had to even turn on the heat a few days!  Temps of 39 in the a.m. two days in a row!!  But we still got to go on our walks now and then.

Thursday, Amber had her spring concert which was so nice!!  And having the technology we have today, I was able to upload video's to Darrin and Kris in Mexico!  So it was like they were listening and watching the show with us!  This video is the choir singing a special song for one of their music instructors who just rec'd his masters.  Amber is standing in the back, on the left, 3rd in, with the scarf.  This was called the 'cup' song!  Really cute!  And a nice tribute.


Nick and his dad worked really hard one weekend clearing out some of the field behind their house.  Nick rides his bike over the 'bike trail' they made and will also be running on the path for his football training!  I just followed behind him taking this video. 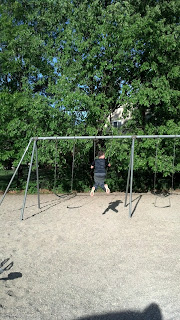 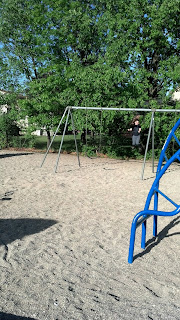 Yesterday, Amber had a sleepover BD party to go to in the afternoon.  So nick and I were on our own!  We did some errands and dropped of Amber then later we got a pizza and went over and had dinner with Uncle Jeff!  Off for our Kalee walk to Nick's school...he was on the swing while Kalee and I just watched.

Auntie Dawn is in Argentina! visiting her friend who is working there until the fall.  So far, she's having as good of a time as her brother & Kris did this past week.  I'm so glad the kids are able to travel and enjoy themselves.  Next on the travel scene are Ron and MaryJo!  They are going for a week, out of the country as well!  Not sure if it's Bahama's, Antigua or the Caribbean!  Yikes!!  It escapes me right now and Bob isn't sure either!

So glad everyone has had or will be having a good time!  I know I did!  And look forward to my 'shift' next year!!!