Nancy Nurse is back! 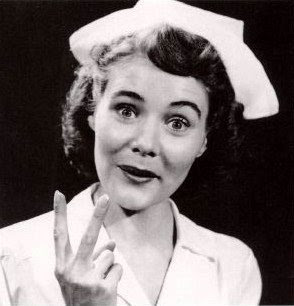 Yep, SHE IS BACK! So early yesterday afternoon, Bob and I decided to go for a ride. OK, it was his surgeon who suggested we go for a ride..to the ER!! Yikes! Bob got up in the a.m. and actually said he had NO pain at all! Felt great and was actually smiling and had a song in his heart. OK, getting sappy but you get the point. He felt great. He was in shaving and getting ready to go to out for awhile and next I know he's TRYING to walk into the living room. I say TRYING because he couldn't put ANY weight on his leg!! Severe pain..oh no!!
Panic sets in; call the Dr.; Dr. said he might have broken the bone at the bottom of his hip replacement; panic sets in again and again!! Off we go to ER to spend the afternoon. Literally! But the good news is/was the bone wasn't broke! That's a big WHEW!!!
Appears Bob injured the major muscle along the side of his leg from the hip bone to the knee. We're (ME!) thinking that when he puts his socks on that he's stretching that muscle. This is where you have to have a picture of someone sitting on the end of the bed, pulling his leg just about up to his chin, putting on his sock(s). He looks like a circus act for the rubber man! Bob's been so proud that he can put his socks on but I can see where this little action has caused him problems.
Bob feels pretty good today but he's going to rest, use the cane and just be cautious when he walks. Also in our hospital ward today is Mandy! Yep, I had to take her in on Monday because she was limping with her right front leg! Not the leg she had the repair on..gezzzzz now what..turns out she and Bob have the same problem. Soft tissue injury!
So, my rounds and 'shift' are coming up so I had better get to work! It's a tough job but someone has to do it! Just hope the birds and fish hang in there!! Oh, yea, I did get some herbal meds for the fish - he was lethargic and not eating..turns out I was overfeeding him! Go figure! He's happy again and making his love, bubble nest! Just for me! I am loved!
Posted by Robbie at 8:33 AM