Glad this project is finished!


Geezz...I'm pretty much a self taught knitter.  Yes, I've taken a few online classes through Blueprint (Sally Melville & Andrea Wong (Portuguese Knitting) but otherwise, I've been  self taught.  Up until this Pinafore (for our great grand daughter,  isn't she a cutie!), my projects have come out great!  Or at least I've been happy with them and wear what I knitted.  But I hit a snag with this project.

I honestly couldn't remember how to pick up and knit stitches using the Portuguese knitting method.  I was lucky enough to have Andrea Wong post a YouTube how to do this simple step.  Honestly, I couldn't even remember how to hold my yarn and needles the 'old' way and kept getting my yarn just not in the right spot with the Portuguese.  But, Andrea did a great job explaining so that took care of  one problem.  And, yes, I felt dumb seeing how easy it was! 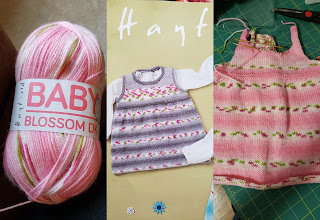 Next up, I wasn't very careful on storing the half finished knitted piece...hence, I did get quite a few snags/mini holes, which I tried to repair.  Hoping when I block it, they will fall into place!  I'm sure when Rilynn wears it, she'll create some of her own, which is fine.  It's meant to be worn, right!

Lastly, I couldn't figure out how to pick up the stitches around the armhole, which is one piece...using my circular needles it just wasn't cutting it!  I couldn't make it around the armhole!   I finally reread the instructions, where it said "using double pointed needles, pick up 54 stitches".  Hmmmmmm  OK, so I get out two double pointed needles and tried to pick up stitches....no way was this going to happen.

Well, I know for sure I won't ever make socks!  I felt like I had three or even four hands!  Yikes!  This was  not fun and more frustrating.  I don't know the number of times I ripped out picking up stitches around each armhole!  But I finally got into the swing of it!  Separating the 54 stitches to 3 needles!  DUH! 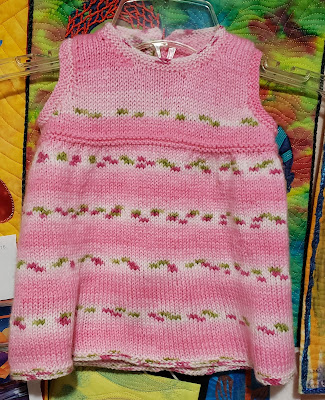 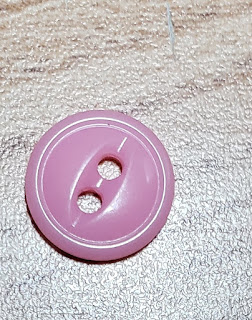 But it's done...well, almost.  I need three buttons for the back closure and guess what!  I could only find one pink button, in the right size , in my button box!  All those buttons and only one pink button!!!


To tell the truth, I'm almost tempted to remake this pinafore....almost...I purchased yarn to make a shawl last fall at the same time I purchased the yarn for the pinafore...so I really want to make the shawl - for myself!  Who knows...I'm not big on making children's knitted clothes because they grow out of them so fast.  So guess I'll be selfish and just make my shawl!  And I won't be using double pointed needles!
Posted by Robbie at 5:30 AM