Congrats to the grand sons! 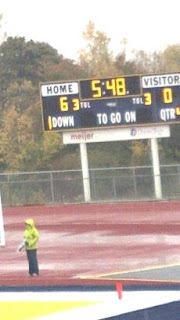 Before I get into the game from Sat., a BIG congrats goes out to Ian for a great cross country season this year!!  To quote his mom, "Ian did really well at Sectionals on Tuesday - he had his best time ever at that course. Unfortunately they just missed advancing to Regionals by 4 points - SO close! He had a great season and they are already looking forward to next year."  Way to go Ian!!!!  We are so  proud of you and your team!!!

Now to the picture here.  This is Auntie Dawn out in the rain yesterday (along with the rest of the parents/family/friends) taking pictures at Nick's football game.  Dawn has taken pictures every game with the exception of one when she was out west at a photography shoot.  She is such a good Aunt!
I give her credit because yesterday was a nasty weather day!  It was only in the mid to high 30's with rain the entire game.  It was raining so hard, they finally called the game with less than 5 min. to play.  The poor kids were froze!!!  I felt so bad for them & us!  But at least Kris (my DIL), Jeff (my SIL) and I had umbrella's and blankets...all of which were soaked!  Jeff even had on his golf rain gear but he too was soaked.

It was parents day yesterday so each player was walked on the field with his parents.  I missed getting Nick's name called out but did get his parents!  Geezzz....I'm just not the photographer in this family!

Nick's team won 12-0 and are now in the Play-Offs starting next weekend.  They'll actually be playing this same team next week so you just don't know what will happen.  I'm just hoping for decent weather as I'm sure everyone else is too!  But if not, we'll be there cheering the kids on!  I'll have to bring my cow bell next week!  I keep forgetting!  Maybe that will keep me warm by ringing it (lots!). 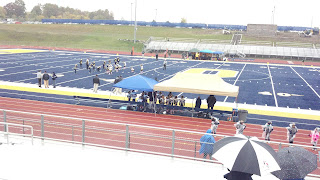