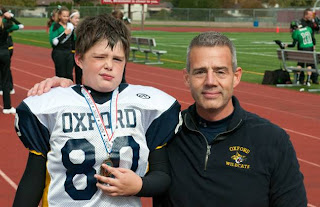 This is Nick and Darrin taken yesterday at the end of the playoff game.  Nick's team, OJW Freshmen Blue were  the No. 1 Seed and played against Clarkston-Blue No. 4 Seed.  The boy's played their hearts out but lost 6-8.  It was a close game the entire time and OJW almost scored in the last few seconds.  Regardless, we are all so proud of Nick and his team.  I can tell you there were  many tears flowing from the moms, dads, family and friends for these kids.    But they can hold their heads up high!  This is a note from my son..."the Defense on OJW-Freshman Blue only allowed (1) Touchdown in any of the given games and two of games were shut outs; that is just amazing Defense and Nick got to be a key player on Offense and Defense.  Nick never gave up on any play!"  You can tell Darrin is a proud dad, as we all are.

On Thursday I picked up some Tila beads and I finished another bracelet.  I just have to put the clasp on, which I'll do sometime today or tonight. 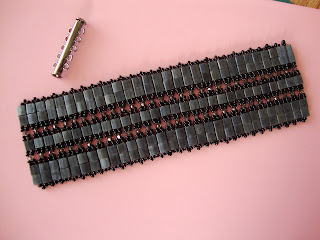 I needed a plain black/gray bracelet and this one will be perfect.  I do need to make a black peyote ring to go with it.  Something to start beading when the World Series starts!   Go Tiger's!!! 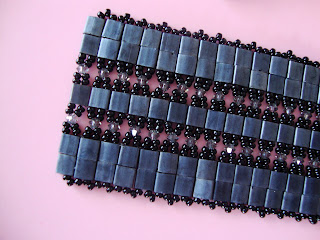 This is a closeup to see the pattern for this bracelet.  I really like working with the Tila beads and this pattern is very easy to follow.
You can watch the YouTube provided by Beadaholique!  They have some great video's for making many different beading projects on their web site.


And now on to BICHON's!!!  I had an email from one of my followers, Diane Kojabash, introducing me to the Small Paws Rescue web site and their upcoming online auction.  Diane follows Kalee's Paw Prints so she is well aware how much we love our Bichon's.   "The  Small Paws Rescue is the largest breed rescue in the country, with over 800 volunteers and over 6000 members in 26 countries.  They have rescued over 8000 Bichons in the past 12 years from across the country."

Diane, who is a Small Paws Rescue volunteer and "Bichon Lover", thought I might be interested in the upcoming auction and she was right!  I am going to donate a few of my beaded art quilts and I also happen to see some items that I'm going to bid on!!!    The auction starts on November 2 so PLEASE check out their site and some of the auction items they already have listed.  Perhaps you might even consider donating some piece of art work or $$'s!!  Either way, I think it's a win/win for us and for the poor dogs that are abused, discarded but then rescued by this great organization!!