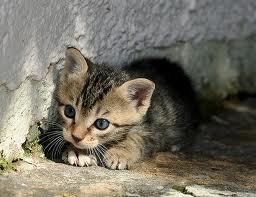 So yesterday I'm at the meat market ready to check out when the lady who was ahead of me came back into the store shouting "someone just threw a kitten out of their car!!".  Well, my heart almost stopped...the cashier, other lady and myself ran outside and found the little one huddled in the rose bushes.  This isn't the kitten but sure looks like it!!!  Our kitten looked identical to this except she had two white front feet!  Adorable!

The cashier pulled the little kitten out of the bushes and had it walk and it appeared to be ok.  You could tell she was frightened and I don't think she's was over 5 or 6 weeks old.
I told them to get a paper sack and I'd take her (I'm assuming here!) to the local shelter.  So off kitty and I went.  She just cried and cried inside the bag...just tore me up...so I put my finger inside the bag while driving and kept rubbing on the inside of the bag.  She quieted down but as soon as I removed my finger she would cry some more!  Just broke my heart!
Anyway, she is in the shelter and appeared to be ok.  I was still shaking and so mad as I talked with the attendant at the shelter.   I couldn't believe someone would throw a kitten out onto the street!  We're talking about a busy street!!  She said I would be surprised at what some people do...I'm sure they have horror stories, which I don't want to hear.
I asked if they would keep her for adoption or euthanize her.  She said they have great success in kitten adoptions and as long as she was healthy she'd find a home.  They were going to check her over then feed her.  At least I slept well last night knowing this little fur bundle from God was safe and sound and would be taken care of.  Some people are just plain sick!  And I hope whoever did this had a horrible night and don't sleep for weeks thinking about what they did.  Karma!  It will come back to them!!!  And I hope it bites them in the butt!!!
Posted by Robbie at 12:29 PM