Yes, it's been a busy week and probably one of my least productive weeks. Just a lot of running around and not staying 'to home'! That's why I love staying home...

Amber was in the "Willy Wonka Jr" production this past weekend along with the Super Singers from Clear Lake and Oxford elementary schools. Here's a picture of the performers (Amber is 3rd in from the right). Amber played the 'grandma' of Willy Wonka and got to speak all her lines while laying in bed! She did a great job and didn't miss a beat! Plus, I loved her night hat! 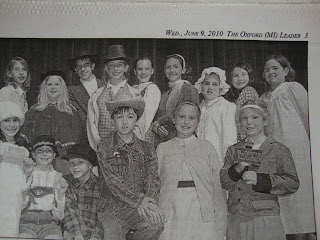 I've never watched the movie "Willy Wonka & the Chocolate Factory" but I was so impressed with these kids! I felt like I was watching a Broadway play! These kids did a fantastic job of acting and singing..and singing they did! The two girls who played Willy and Charlie were just phenomenal! They have acting or singing careers in the future! This is Amber taken after the play. Think she was glad all the practice sessions were over with! 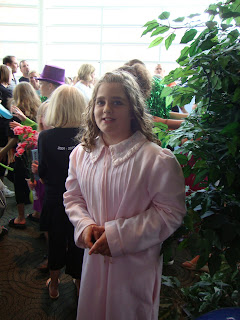 Of course our 'boy' was getting a little antsy since this was the 2nd performance he'd seen. But he was still good! This was during intermission! I do have to give a big shout out to their music teacher, Peggy Mueller. She did a fantastic job leading these kids!! Well done, Ms. Mueller!! 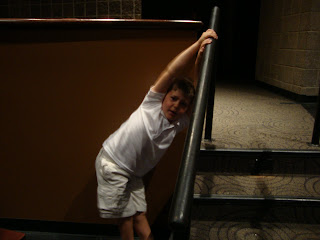 Saturday was also dye camp for our Complex Cloth Club. Each year we have dye camp for a weekend so you can leave the mess at dye camp and not your house. This is the cabin and surrounding area where we can set up clothes lines and tables outside to paint or dye. 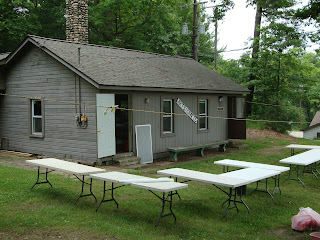 Talk about having your choice of dyes! I'm not sure what or how much dye was leftover since there only were six ladies dyeing fabrics. Nine of us prepared four different dyes in a particular color and some of us even prepared a few extra containers. This was just one area of dyes. I'll be seeing some of the ladies tomorrow and I'm curious to hear about their weekend. 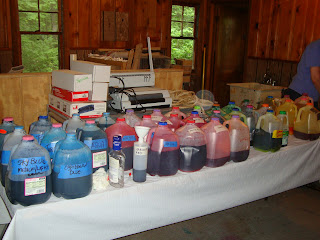 I was only at dye camp from 8:30 until noon but I didn't dye anything. I just dropped off my dyes along with two others. Amber's play was @ 2 so I left to get dressed at my daughter's.
But I did do some dyeing at home since I had some dyes to mix up for dye camp. This was the shibori piece I had stitched. 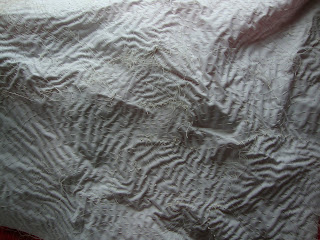 And here it is after I painted some black dye on it. It's now downstairs 'cooking' with some blue and cranberry dyes I painted onto the white areas. I'll post pics later this week of the end result on this piece. This piece is only about 25" x 25"

This was a red piece that I had stitched..looks pink but it really is RED. 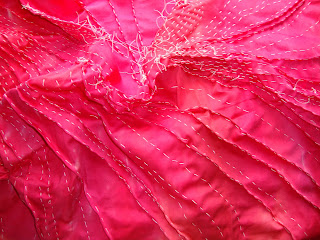 On this one I mixed up a Robin's Egg blue and a Brilliant Blue and painted the entire piece. 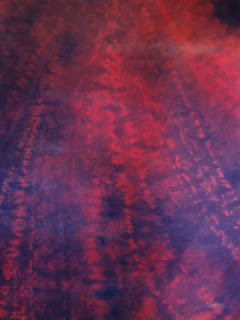 This is a closeup of an area. I'm actually pretty happy with the way this one turned out. It's roughly 22" x 36" so a nice size. 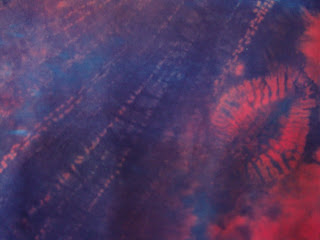 So now to finish up some computer work and get back to working on my BJP fish. I'm afraid I've been ripping out some more beads. I'm using some bugles for the fins but didn't like the colors, then thought I'd add some beads around the edges..didn't like that so out they came! Geezzzz Talk about non-productive! Ripping out beads or stitches certainly doesn't make you feel like you've accomplished much - guess that's because you haven't! I did make another peyote ring! I have a few more to go and at least that makes me feel like I'm doing something!
Posted by Robbie at 9:26 AM