Saturday was my last 'alone' grandma day with the kids for 2015!  What a fun day we had! Darrin and Kris are away for the weekend so Auntie has been spending the nights with the kids. It started out meeting Auntie at the Lacrosse center for Nick's 10 a.m. clinic.  He's learning to play Lacrosse too and the clinic is a good way for him to learn all the rules.  Amber didn't have a game until noon so after Nick's clinic the kids and I had some talk to sit and talk.

After Amber's game, in which she did a good job!, we headed off to Panera's for some lunch; then home to let Brody out and play. 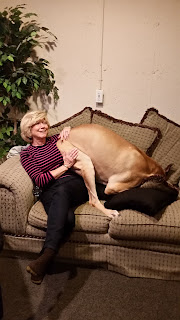 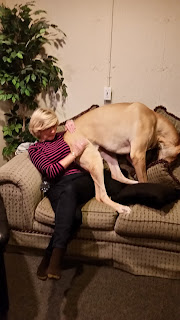 This was Brody resting after his playtime!  Yea, it was grandma playtime I think! 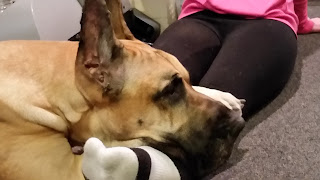 Darrin and Kris were having their annual Christmas party on Sunday (yes, they still elected to go away for a few nights!) so I asked Kris if there were any chores kids and I could do to help them out.  Kids and I only worked for about an hour and got everything done!  Nick put on Christmas music while we cleaned!  It was so funny.  As soon as we got in the car,  he would have the radio on Christmas music!
Next up was playing games on the xbox!  We elected bowling which was fun (Nick checked the local bowling alley to see if we could play but open bowling was over...too bad!).   Amber did pretty good but every time Nick went to bowl, Brody would get in his way!  It was funny....just not funny to Nick! 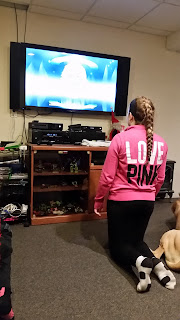 We decided to go to Red Knapp's for pizza and it was delicious!!  YUM!!!  We ordered it "well done" so the pepperoni was really crispy...I'm a 'cheese' only pizza person until the pepperoni is burnt...glad the kids feel the same way!  Anyway, we laughed a lot at dinner and Amber was so sweet...she wanted to pay for the pizza herself!!!  She is such a kind soul!!  Love that girl so much!
So on the way home we drove around the subs to look at the Christmas lights!  Of course, the Christmas music was playing!!! Kids teased me about getting lost in the subs but grandma found her way out!!
Back home again and Nick wanted me to sew lights on a Christmas sweater he had so he can wear it for their Christmas party.  He is so cute!!!  I think his idea turned out pretty good! 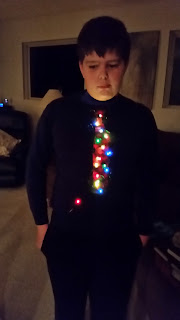 I love my special time(s) with these kids.  I've always felt bad that Ian and Kayla have lived so far away from us.  We all have missed out on grand parent times....but we have some good memories on the times we have had with them.
So all the presents are wrapped and under the tree.  This week is busy with dog grooming appointments; meeting up with friends for the last 2015 time(s) and preparing for Christmas Eve and Christmas day with the kids.  I have started to pack some of my summer clothes for Florida and bedding.  So much we can't do until the day before we leave but we usually have the car all packed by early afternoon on the 26th!
Posted by Robbie at 6:30 AM