OK, Saturday was so busy that I'll need to post in two parts!  I'm going to start with Saturday evening first...just because it was so much fun (so was the afternoon but hang in there and you'll see why Saturday was a hoot!). 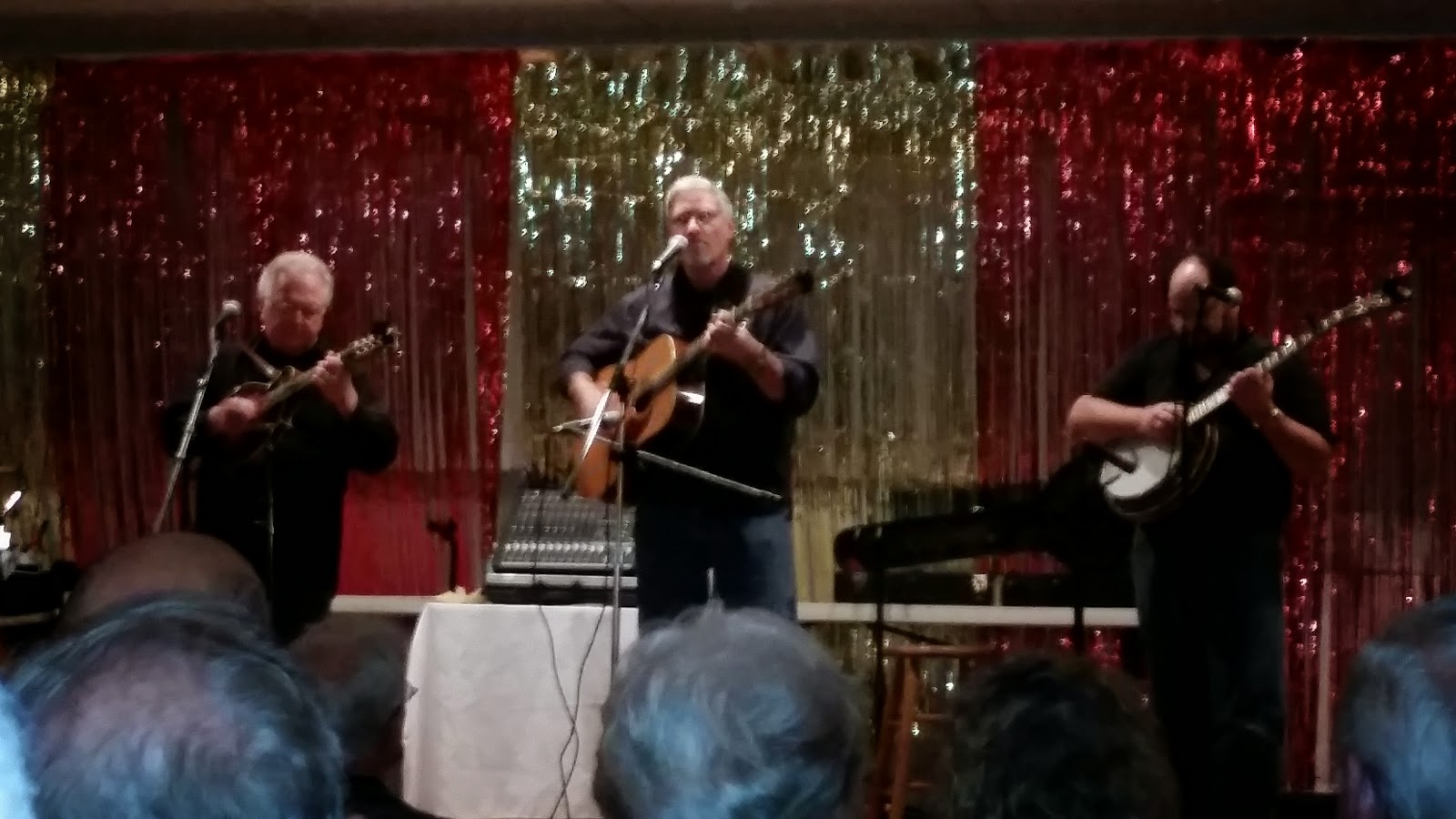 Yep...this was what we did Sat. night!  We went to a concert!

Jan and Larry were kind enough to give us their tickets for a concert at the community center for Saturday night.  Well, those who know my 'room mate' they also know he's not one for going to concerts or shows soooooo...after several discussions Bob relented and said "lets go.  no sense wasting the $$'s to see the show."
Well, we sat down with the other 'healthy' members of the 'gang' (some are sick with the same cold Bob has) and started to listen to the bank Backwater.  And rather than me describe the band members, this is a quote from a blog by Ted Lehmann.

" Backwater, from Ocala, FL, is just such a group. They are a well-established group in Ocala, where they have opened for a broad range of national touring bands and play regular pub gigs downtown, and have toured festivals mostly in Florida. Their sound is a smooth and melodic mix of bluegrass, country, swing, and grassifed rock and pop. Founded in 1984, they are led by Bill Taylor on mandolin, who had a gold record with the Guardsmen for Snoopy and the Red Baron years ago. David Dean on banjo is solid and quite nuanced in his play. Chuck Richolt on guitar and doing much of the lead singing is very solid, with a good voice. "

Now, I'm not sure if  you noted the bit about the"gold record with the Guardsmen for Snoopy and the Red Baron"...well, this song is one of Bob's favorites!  So he sure was delighted to see the fellow singing and playing the mandolin was one of the writers of that song!   He was hooked! 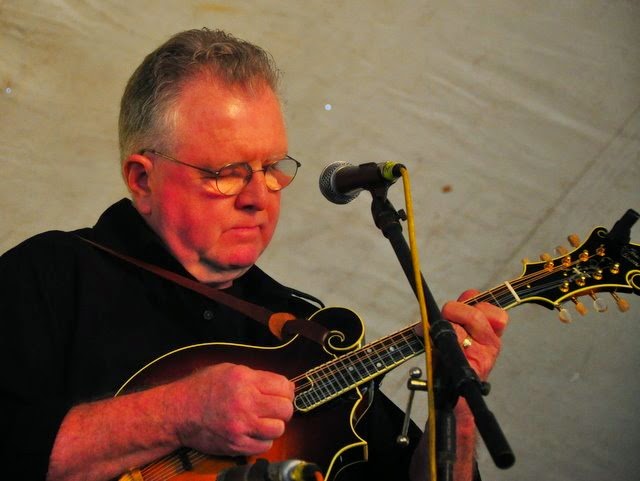 This is Billy Taylor...and he could play that mandolin!  He's one of the original Guardsmen. 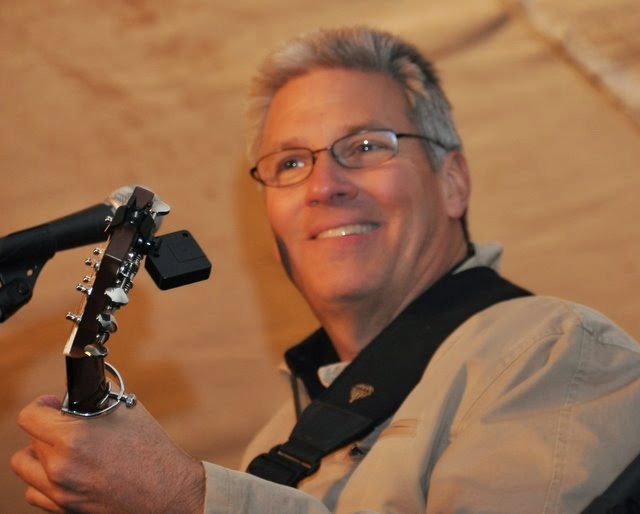 Chuck Richolt was the lead singer and played guitar. 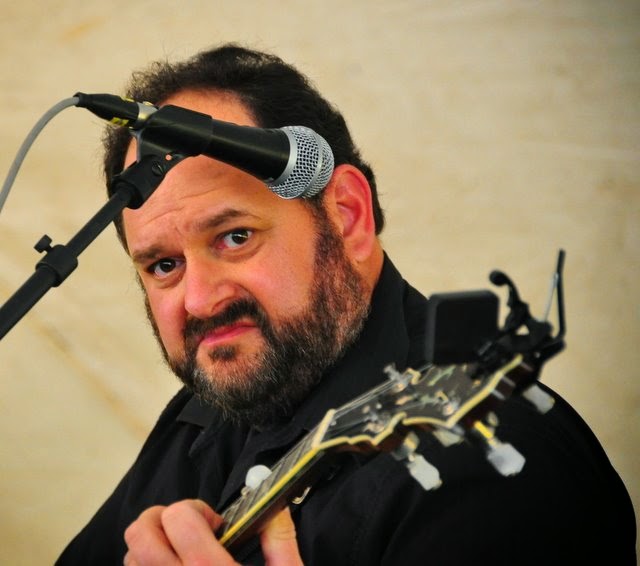 This was David Dean who played a mean banjo and was so funny...actually they were all funny besides being talented and entertaining.

Doesn't David look Frank Fritz on American Pickers??  OMG...this guy was so funny but sure could play that banjo!!!

I do feel bad I didn't get a picture of the bass player.  She was great but you can see her on the video posted below!  I talked with her after the show and she was a hoot!  A widow who drives her own 40ft motor home (with a little car on the hitch!) back and forth, to and from the shows.  She lives in Jacksonville, Fl.!

Well, to make this long story just a tad shorter!  Bob had a blast!  He loved the show...even bought their CD (which is good!  I listened to it today!).  The show was great...music so much fun!  And they had a drawing after an intermission ( and free wine and crackers!)!  And guess who won the 1st drawing!  ME!  and guess who won the 3rd drawing!  Bob!  What are the odds!!!  We each won a $40 gift card to the club restaurant!

But that's not all folks!  Bob is a beer drinker (Bud Light usually)...oh sure, he'll drink the 99 cent margarita and will have a Long Island when we have dinner at Applebee's...but beer is his preference....so, I mentioned at intermission they had wine and cheese for folks and water.  I asked Bob if he wanted water and he said "what kind of wine?"...I didn't think I heard him right so again I asked if he wanted water.  "No, which wine is good."...so I grabbed a glass of Chablis and he tasted it saying "that's not too bad"...WHAT!
Well, come to find out Bob didn't realize you SIP wine!  He doesn't SIP beer..he gulps beer!  So after he had his glass of wine (which lasted through intermission and three songs!) he said "now I know why you sip wine...it tastes good but you can't "drink" it!"  Hmmmmm  It took me several minutes to understand the difference between 'sip' and 'drink'.   Guess Bob thought we all 'drink' our wine...you'd think he would have noticed when we eat out or when I have wine at home...DUH!

I can't thank Jan and Larry enough for giving us the tickets...and two 'firsts' for my hubby!!  His first concert and his first glass of wine!!  Woo hoo!!  What's next!!!  So here's a short video from last night...such a great band....lots of fun....tomorrow I'll post pictures from the quilt show Susan and I attended at the Villages!!!  Nice show and Susan and I did a good job at critiquing the quilts!!!