No I didn't have too many margarita's last night! What you see is what we saw and I was lucky enough to get a picture of! This is a new form of frog jumping! 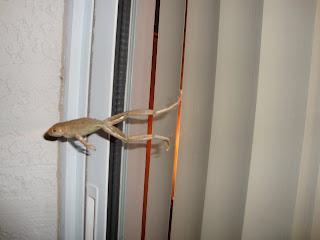 Actually, this is what I saw when letting Kalee out last night. When we rented the other house in Ocala Palms several years ago, we'd always see and hear lots of frogs around the end of February. This is the first year we've seen them at Larry's in the 3 years we've been here. 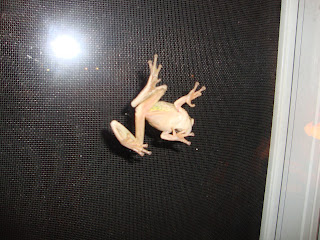 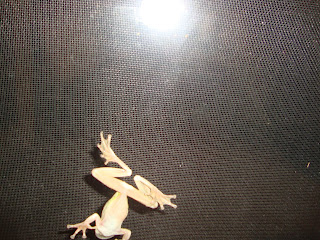 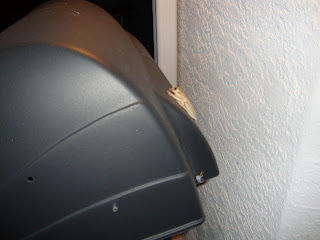 Actually, one of these little fellows joined us in the bedroom the other night! We were laying in bed and Bob said "something is wet"...turned out it was a little frog that jumped on his arm! So after a little "hide and go seek" with a frog, we finally found the little guy and 'encouraged' him to go spend the night in the lanai! The next morning he was let out to join his frog mates! Thank goodness Kalee hasn't seen these little guys yet...actually, she has but it's been on the street and they don't look as good as our house guests!
It's very breezy here today, slightly humid and temps suppose to get in the 80's but it's suppose to cool down (in the 70's! That's a cool down!) so all is well. I have to upload some many pics and I'm way behind but just too busy "for pin curls" as they used to say! Anyone heard of that saying before? Maybe my great aunt just made it up...anyway, this gal better get in the shower and get her day started!
Posted by Robbie at 10:00 AM