Wed. with the kids 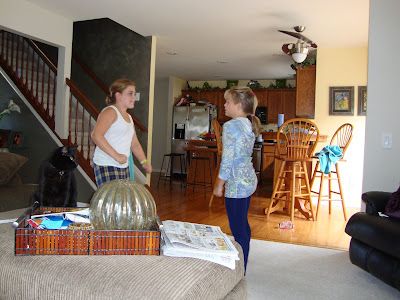 Wed. was a fun day with one of Amber's friends who had a sleep over. Only problem is her name is Amber also! Above picture is the girls getting ready to do their 'dance routine'. Really cute. I put a video at the bottom of this post. The 'singer' you hear in the background is actually Nick. He and I were playing a card game and when the music came on he was singing..so funny! but adorable!

Here is Nick explaining to me how to play this game. Geezzz It was some space battle game and I still don't know the name of it or how to play. Amber did say Nick was making up rules as he played but heck you couldn't prove it by me! 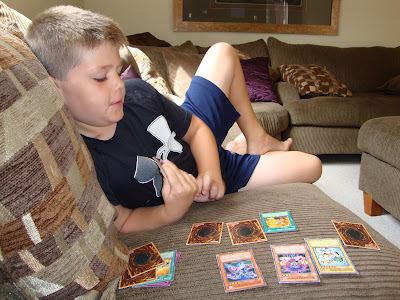 We had a busy day planned and started off going to the park. This is a great park (at least I think so!). Of course, Nick had to jump off the swing just to make me nervous and Amber kept swinging so high I thought she was going over the top..not really but it looked like it! 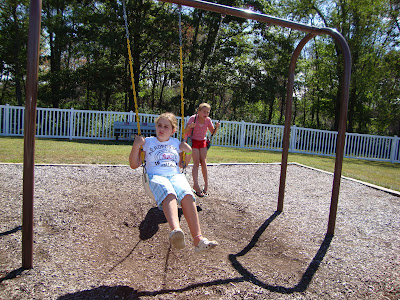 Nick was in the shot somewhere! 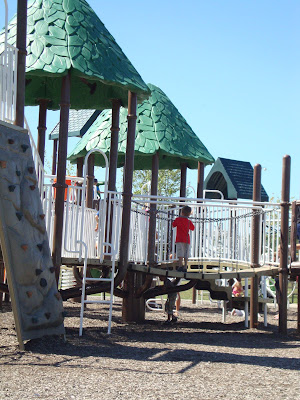 So after the park, we headed to the bead shop. For Amber's BD present, she and I are taking a bead class either this Friday or next Friday. We're waiting to hear back for sure on the date. Then we went to a new toy store downtown Oxford. Can't remember the name of it now but it was cute. Lots of different types of toys which seemed to be educational vs just 'toys'.
After lunch we went to another new boutique which the girls wanted to go to. Nice shop but we didn't buy anything. Off to the library for the Sky Lab show which was over an hour long! Girls said they were bored but I think enjoyed it..ok, maybe they didn't. Nick seemed more intrested in the lab and took a paper with him showing all the stars and planets. I'll have to call tonight to see if he went outside to find some of the planets. he was reading the names (he's only 6!) of the planets and pointing out where each one was! The show was similar to what we saw at Cranbrook last year and I think Nick had/has more of an interest in this.
So back home and grandma 'opened' the pool! This was a first and it was fun for kids and me. They are all great swimmers so I wasn't hesitate about being on 'life guard duty'.
Amber tried to hide from getting her picture taken but I knew she could only hold her breath for a little while. although, she and Nick swim the length of the pool under water holding their breath the entire time!!! 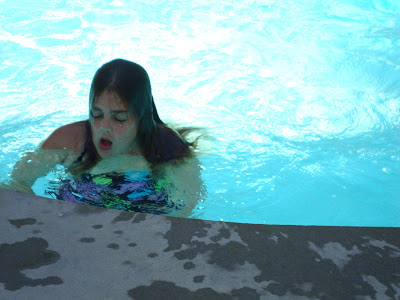 This is our little FISH! He loves the water and is a really good swimmer. hope he wants to join the swim team when he gets to high school. 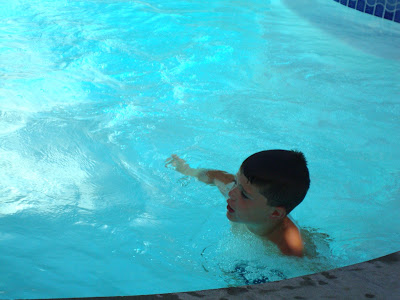 Check out this dive! 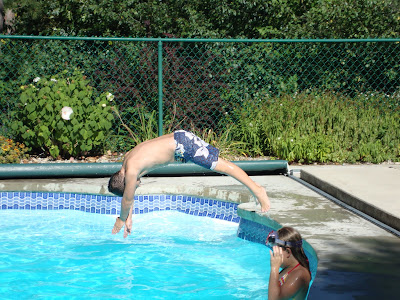 and our trio (my Amber is hiding again!) but they did have fun. 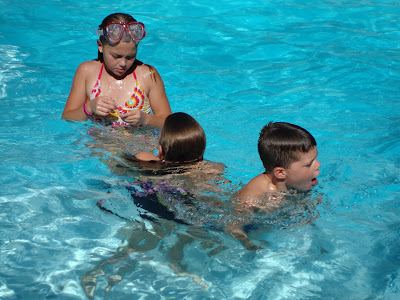