One Down, One to Go! 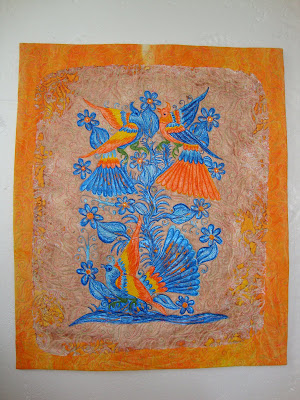 Finished my art quilt for the MQAI exhibit. It's called 'Imitating Amate - Bark Painting'. Bark Painting is one of the many Folk Arts of the Latin American Culture. From what I've read it was quite popular up until the 50's then disappeared. Bark painting came back in the late 60's and there are lots of artists doing this form of art work especially in Mexico. They also call it Amate bark paper. So interesting! 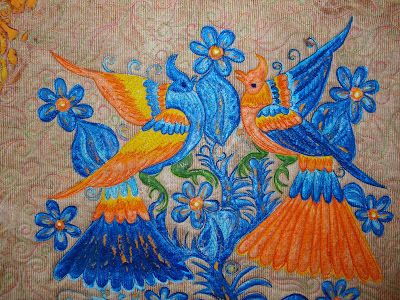 I was given permission to use a painting by Tomas Ramirez/Mexican Folk Art web site for my inspiration. I love the colors in his paintings. After I had a pencil sketch on my Tyvek fabric (I purchase from Joggles), I painted the Tyvek with fabric paints (Jacquard, Setacolor, whatever I had handy!). 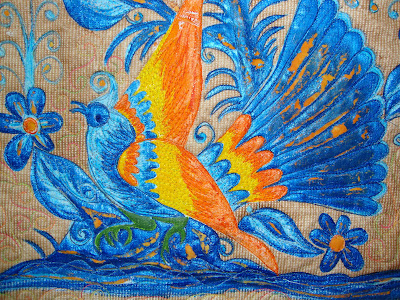 After I free motion quilted the Tyvek and background, I used both my soldering iron and my household iron to burn away areas of the Tyvek. Scary but it's the most fun I have! This is my 6th piece using this technique. Actually 7 counting the 'sample' piece I did (not sure what I'll do with it!). 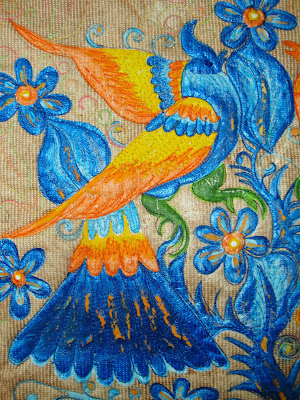 I just realized, as I was hunting for photo's, that I've not taken any of my 2nd South of the Border piece for our exhibit. I thought I had posted about it before but I can't find pictures of it. hmmmm It's a Gene Autry album cover.
I'm too lazy to get up and take a pic so I'll do that tomorrow or Tues. It's primarily all stab stitching so it's been taking some time to finish. It will also have beading on it, just the edges and a small amount inside the quilt.

And check out this little guy Bob spotted on a leaf yesterday. Actually, there was another one SMALLER than this guy! You have to envision this leaf is only about an inch or two long! I've never seen any frog this small! Maybe it's a good luck frog! I hear there are some good luck frogs! 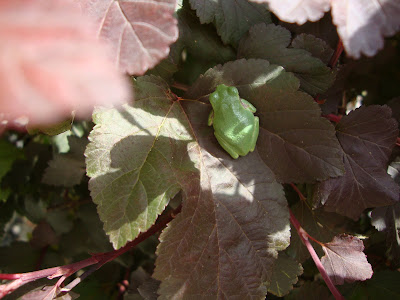