Visit in Clermont with kids 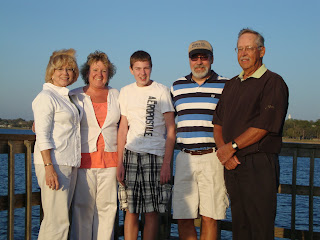 Yesterday we met up with Ron, MJ, Ian and his friend Blake in Clermont for dinner. The years we have met with the kids during their Florida vacation we always have dinner at the same restaurant. We found this restaurant as a fluke the first year we met up with the kids. It used to be called Benchwarmers but now it's just called Lakeside Inn. Guess why! Yep, it's by the lake! And the food is really good and you can eat outside which makes it nice.
I asked Ian and Blake to take some pics of the view from the deck where we were eating. Yes, that is a skier on the water! The temp was in the low 70's but there was quite a breeze. 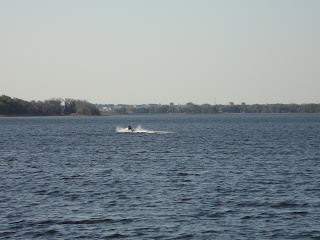 Ian did a good job taking pictures, with direction from Blake?? 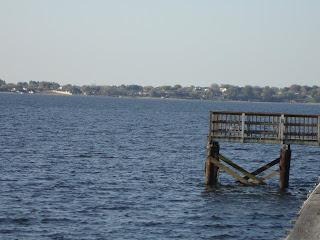 Here's Ian and Blake waiting for their burgers! We really had such a nice visit with everyone and of course lots of laughter! 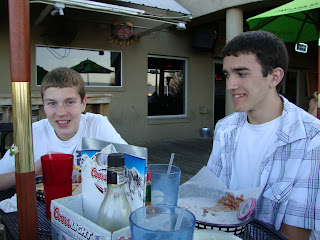 After dinner we decided to get some pictures so we just had to walk out on the pier. Yes, it was windy and everyone kept laughing so it wasn't easy getting pictures. Poor Blake had to endure time with grandpa and grandma! And yes, that's my shadow taking the picture! 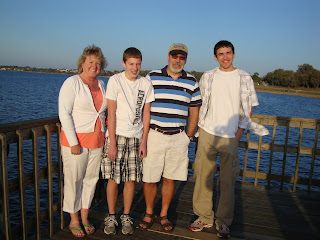 Grandpa was hooting it up! Good thing no birds were passing by! 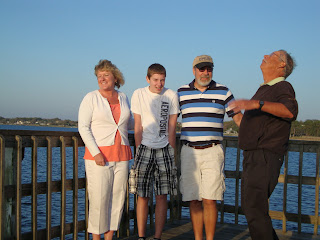 We did miss Kayla this year but she was there in spirit! Kayla's back in Indiana working hard on her college studies. Kayla made the dean's list her first semester and we're quite proud of her. She's a hard worker and has a good foundation for the rest of her life!
Today is cleaning day and beading on my umbrella. I'll post pics of my BJP for April in progress. Temp should get up in the high 70's today so maybe I can get some more sun on my legs to match the sun on my knee caps! And let's hope Blake gets some sun on the rest of his body to match the sun on his nose! Enjoy the rest of your vacation, kids!!!
Posted by Robbie at 8:44 AM