A day of fishing!

The kids love to go fishing as one of our outings in the summer.  We usually would do the paddle boat but they aren't running during the weekday anymore. That was a cheap outing a well for on $5 for 30 min.  So on Tuesday it was an afternoon of fishing.

I love being outside and watching wildlife but feel so bad for both the worms and the fish!  So, to be honest I'm quite happy when the kids don't catch any!   But they ended up having a good fishing day. 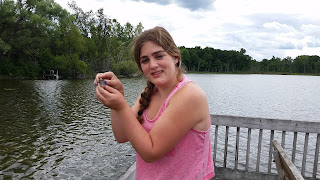 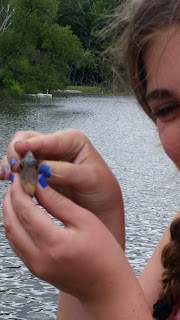 And Nick caught 5!  Nick was so cute...when I got to the house he had a pole for me to use!  That was so sweet that he thought about his grandma that way!   No, I didn't put any worms on my pole but I did cast...I like doing that...just didn't want to catch a fish!! 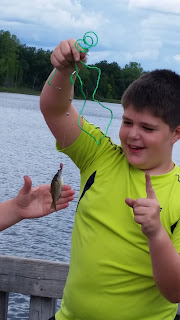 Amber always gets to take the hook out of the fish!  Thank goodness!  I can't touch either the worm or the fish!  When I would take my  kids fishing, I took scissors with me to cut the worms!  YEP! 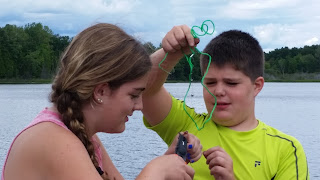 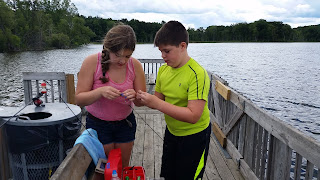 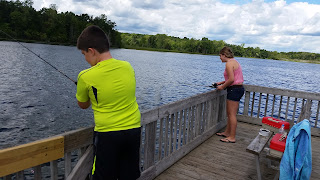 They put the fish back in the water and we also end up feeding a worm or two to the fish!  That's the best part.

I do have a sweet, funny story from the day.....as we entered the park, we had to pay a fee of $5.  No problem...I handed the attendant a $5 bill, as she was getting the receipt, I saw where seniors get in for $4.  So I said "I'm an old person, can I get the senior rate?".  "Sure" the attendant said...but then Nick piped up from the back seat and said "grandma,  you're not old, you're just experienced!".  Nick and I did a high five and even the attendant laughed.  I thought that was so cute.  Amber said "Nick, that's the nicest thing you've ever said to grandma!"

Nick had football practice in the late afternoon, so after Darrin and Nick took off, Amber and I headed to dinner at Italian Gardens.  They have 2-4 Tuesday dinner (buy one get one free).  We all love their spaghetti sauce...yum...plus it was nice to have a dinner and conversation with my grand daughter.  It's always fun to be with the kids and now that they are both older the conversation is a hoot!  Even Nick is fun to be with one on one!
Posted by Robbie at 7:00 AM