The Wrestling Match is Over! 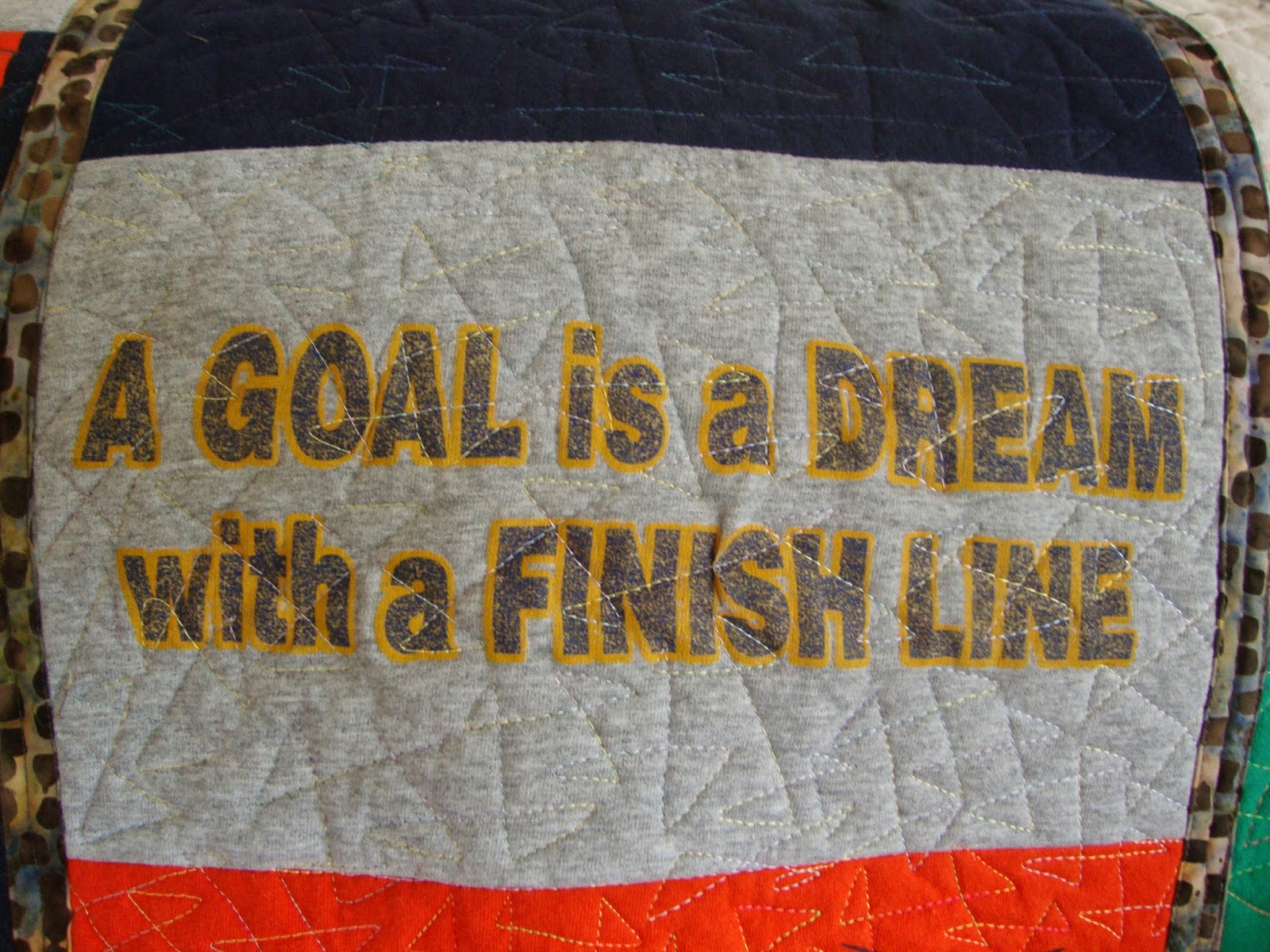 Yep...this is so true...and my 'goal' for making Ian's T-shirt graduation quilt is finished!!! 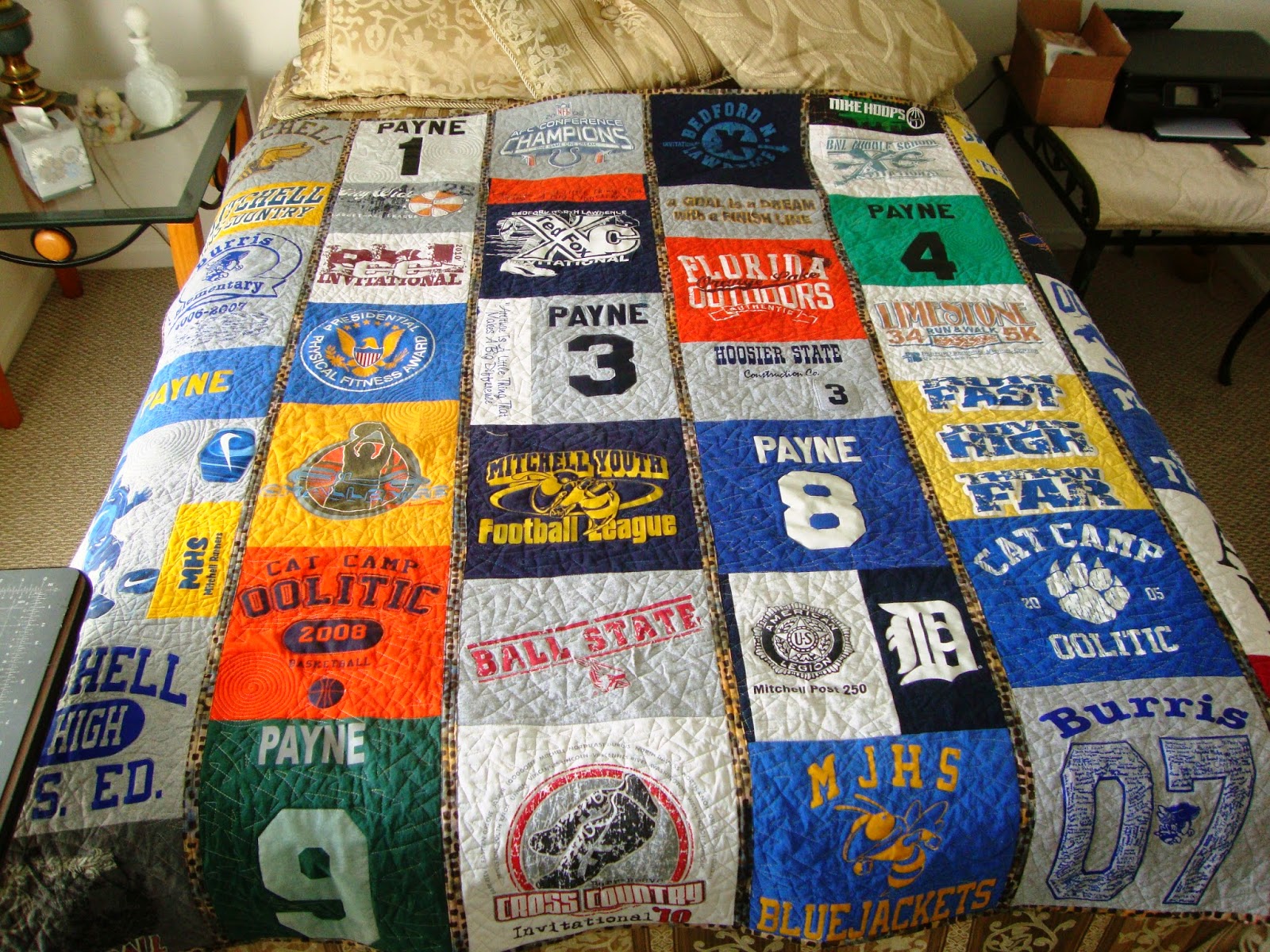 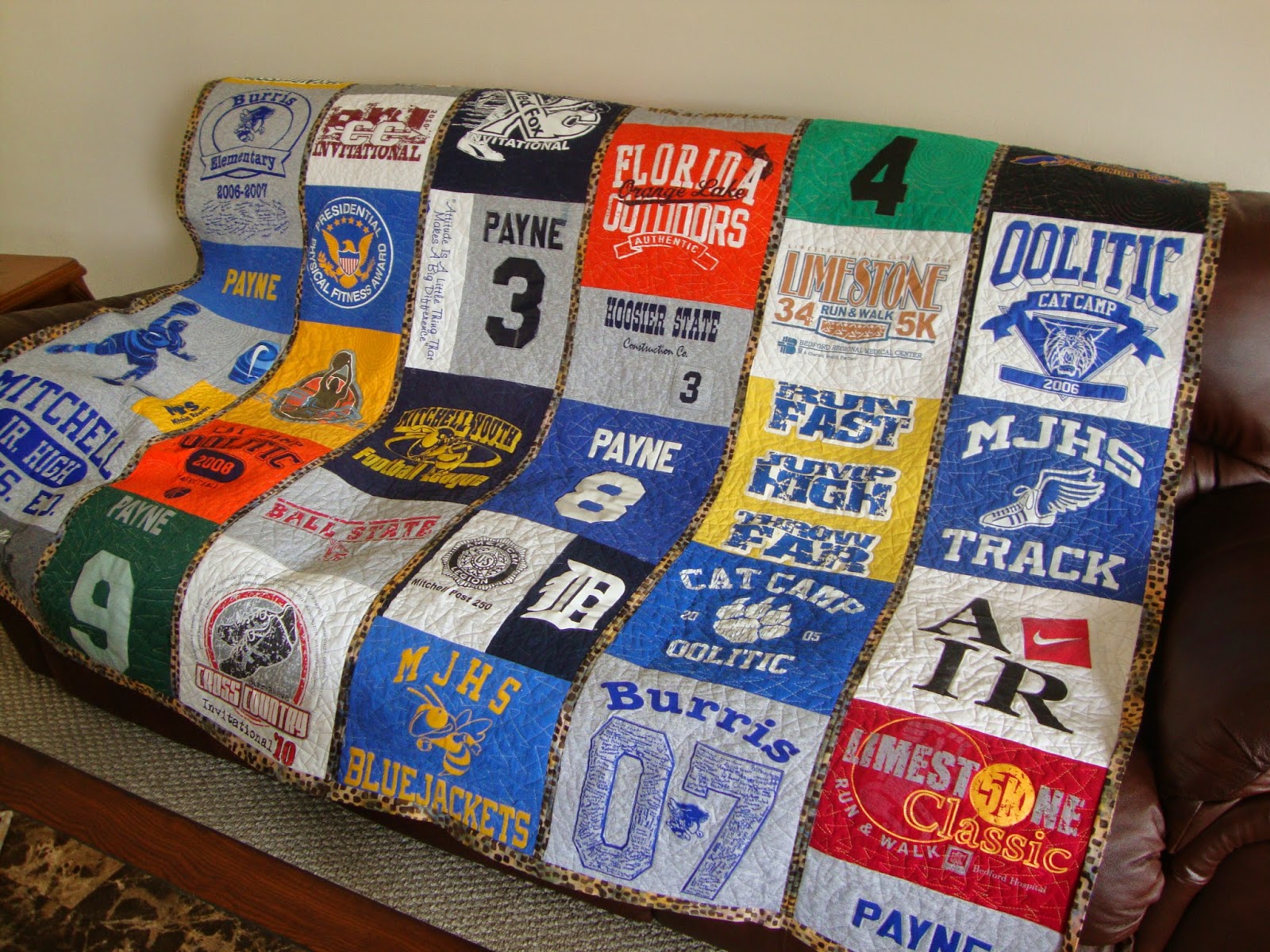 But not before the quilt and I had a few wrestling matches!  It doesn't look that big or that heavy but trust me, it is!!  I have it laying on a double bed and both sides are hung over...I think it will fit Ian! 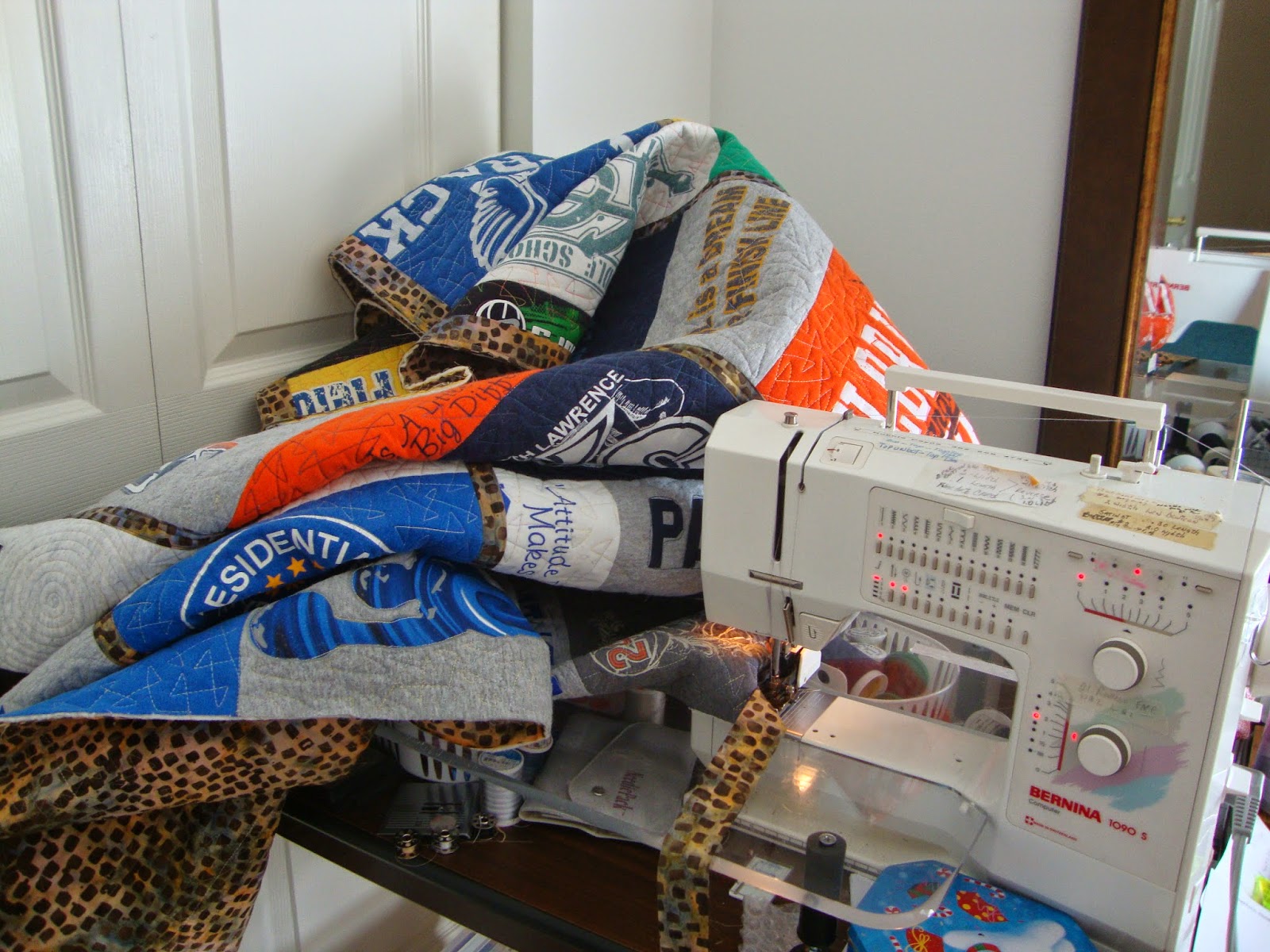 This was how I had to jam the heavy weight bugger on it's side just to sew the binding on!  My arms were getting so tired by trying to hold the quilt and move it at the same time.  I can't believe how heavy it is.  I just might weigh it!

At least I was smart enough to follow Marianne's GAYG method.  That made some of the maneuvering the quilt under my machine a tad easier when it came to quilting it and joining some of the panels.  I do love Marianne's QAYG and will use it more often in the future too!!

And check this out!  What's missing!!!  Well, after I wrestled with sewing on the binding, I was sweating so badly, I figured I'd clean up my sewing area then get my shower.  At the same time, I figured I'd unhook my machine and drop off at the Bernina's dealership for 'her' day at the spa (yes, I was still stinky but I didn't care!).    My machine was due for a cleaning and with all the lint from the T-shirt quilt and her effort in helping me put it together, I thought it was the least I could do.  Give the old gal a rest!! 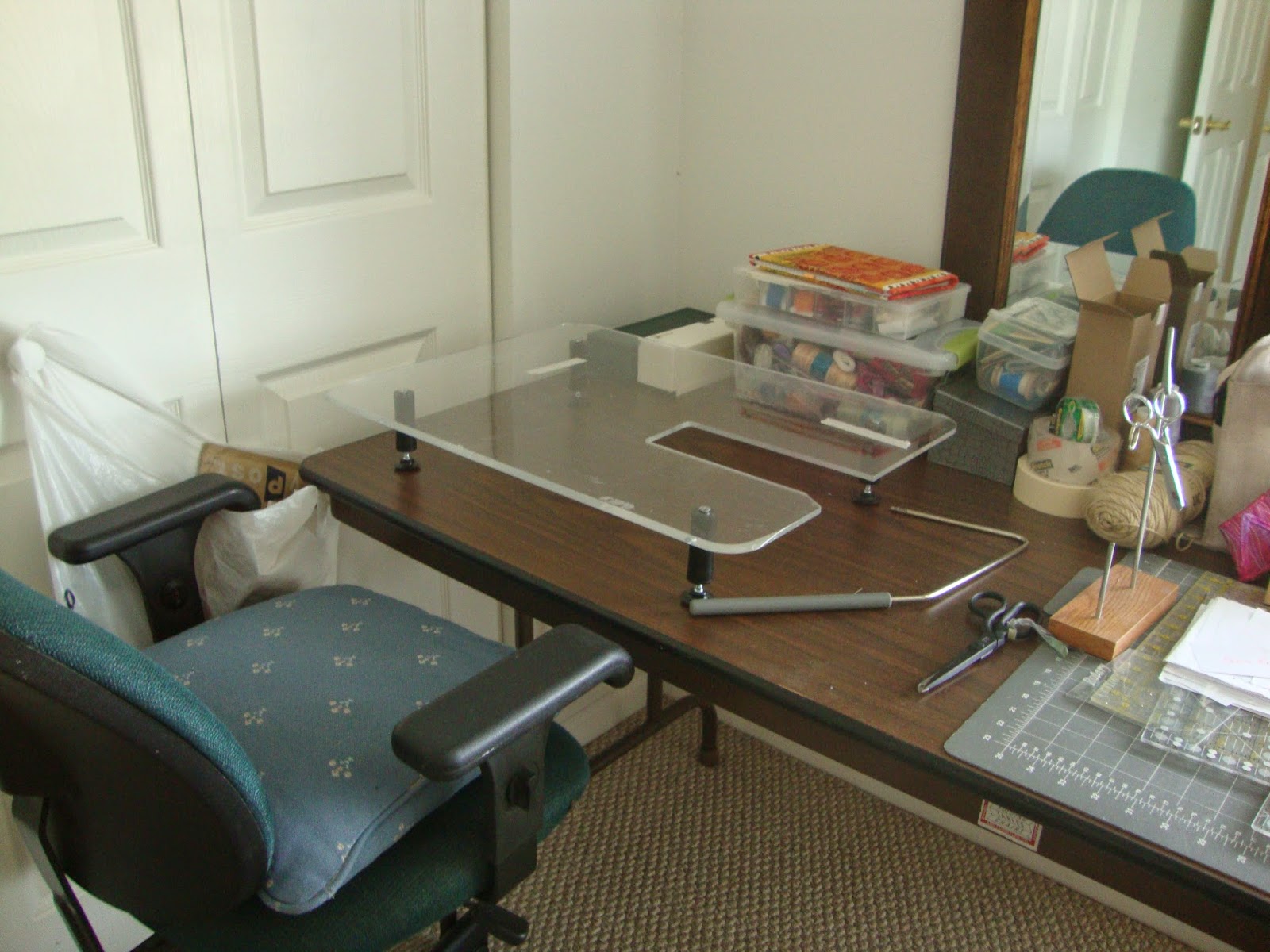 I also packed up some of my supplies for heading back to Michigan, with the exception of embroidery threads and my beads for the leaf project.  I want to start working on hand stitching my background for the leaf so now that the machine sewing is done, I can start on the background without any guilt!  Yes, I was raised Catholic and yes, I have lots of guilt...even over silly things!

Before I forget, check out the beautiful hand dyed scarf Kay gave me the other day!  I forgot to post a picture of it.  It goes with so many of my tops...just my color!!!  Thanks so much Kay!! 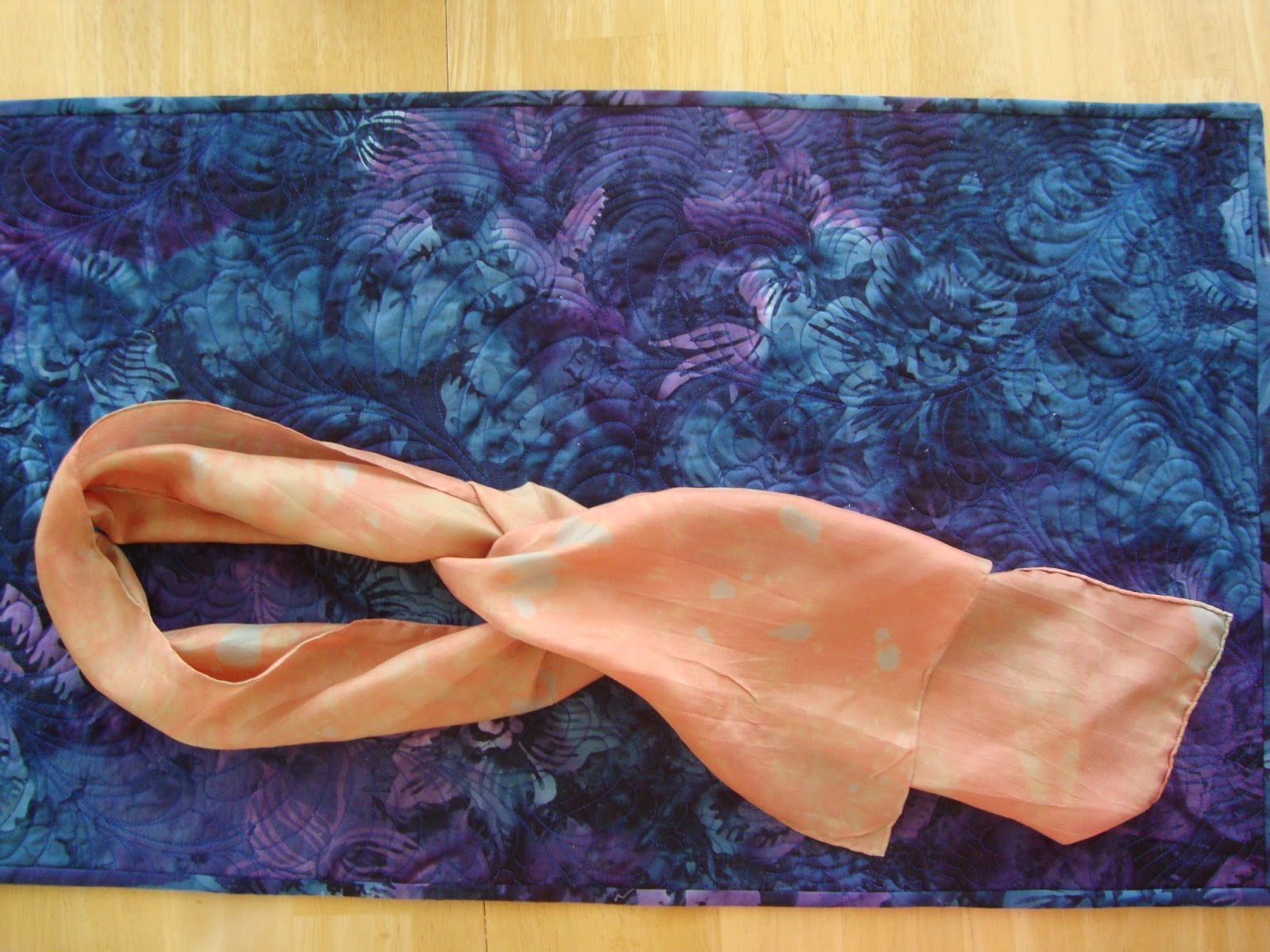 Today, Bob and I took off for some shopping..mainly to get me some tennis shoes for my zip line day!  We're booked for Tuesday afternoon but right now there's a 60% chance of rain so we might have to take a rain check and book on Wed.  I'm just going to play the waiting game and see what works for my other buds!
It's in the 80's again today...just another beautiful Florida day.  My kids and neighbor both sent us pictures of the huge hail that struck last night!  The roads and yards are covered with what looks like snow is hail!  Even the roof collapsed at the Kroger's not far from the kids house.  Guess I'll put up with the 80 degree temps!!  No complaining from this gal.
Posted by Robbie at 4:51 PM