Whew! What a week!

Gracie almost looks as frazzled as I've felt this week!  Whew!  Tuesday started out with getting Amber and Nick for an overnighter & a surprise field trip for Wed.! 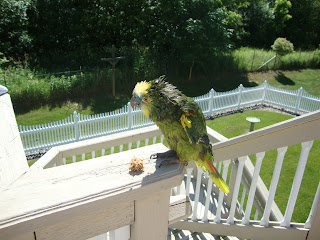 We gave Gracie a bath to kill some time and the kids love seeing her wet!    Kids were so much fun to have around and were really a big help cleaning up after dinner (Nick cleaned off the entire table and helped me gather and take out the trash).  Amber is always the 'cook' and as usual did a great job.  Of course, we played lots of card game...Monopoly being the best one and Wig Out! 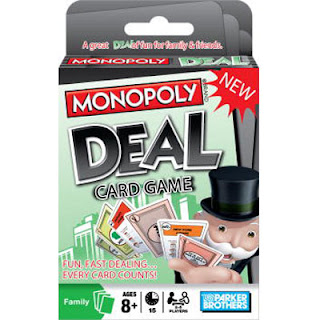 We love this game!!!  Quick game to play and doesn't go on and on like the Monopoly board game!  Makes a great stocking stuffer too!   So back to our night of cooking hot dogs on the grill for dinner...along with other favorite kids foods!  More game playing then even grandpa got in the act with he and Nick playing a Jeopardy like game on grandpa's phone.   Nick even solved a phrase before I had a turn!
Onto Wed. the kids kept bugging me as to where we were going.  So finally we took off around noon too our destination!  Which was Go-Kart racing!  Kids were really excited and surprised!  First, I let it slip that we were going to the library!  That didn't thrill them at all!  I thought it was kinda funny!  But that's my sense of humor! 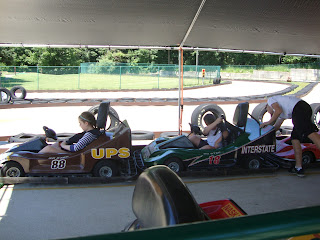 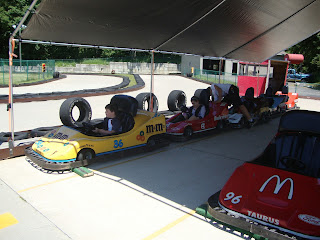 It was just as much fun watching them race around the track as it was for the kids!  They loved it!!!  So much so, that they drove 3 different times!!  The track is really nice with lots of curves!  Amber loved those curves!!!  I think she might be the next Dana Kilpatrick!  Sure was fun but over quickly!!!  Then it was a stop for an ice cream cone then home.

That's when I noticed Kalee didn't seem quite right.  I called the vet and made an appt. for her after I met Darrin to drop off kids.  Talk about nerve wracking!  Kalee never had any symptom other than pain in her belly...no fever, diarrhea, etc.  I was a nervous wreck...she was so sick..just laying, no food, water...she did get dehydrated so they gave her a water injection.  Long story short, we went back to vets again on Thursday with me just a stressful dog owner!  Kalee didn't have as much pain at all (no cries when vet palpated her belly) so that was a good sign.  She didn't perk up until around 6:00 p.m. Thursday night!  She finally ate chicken and rice and her tail was up!!!
She is all better now...eating, drinking and playing with Cody, who is with us for two weeks.
I'll be posting pics on Kalee's blog and daily reports for Cody's mom and dad!  You can check those out too if you are interested on her blog.
Today I met up with my friend, Mary, for coffee and breakfast @ Panera's!  Did some grocery shopping then on to home with dogs!  I hope to be in for the next few days!  I'm ready to stay at home!