Well, I am behind a few days posting about Nick's BD!!!  He turned 17 on the 26th and it turned out he didn't have to work that night so we actually got to celebrate on his birthday 'day', which doesn't always happen. 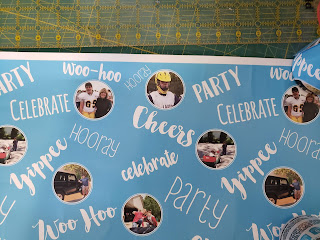 I ordered this paper that you upload seven pictures, which are printed on the paper!  Bob didn't think Nick would notice!  He did!  And he tried to not rip the paper!  He saved several of the larger sheets!  So sweet! 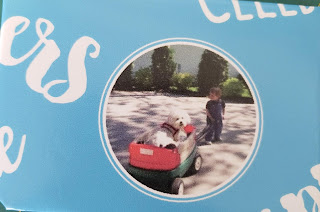 This is my favorite picture of Nick as a toddler...he loved to pull Mandy in the wagon! 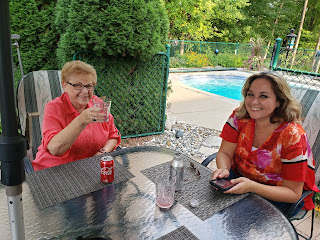 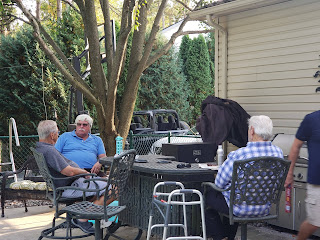 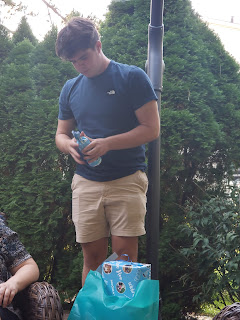 Nick was trying to remove the tape without ripping the paper. 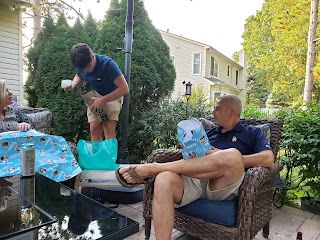 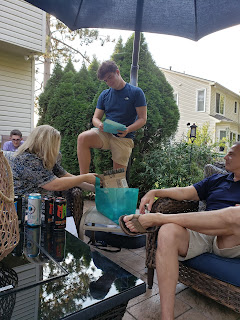 I love getting different 'gag' gifts for the kids.  Nick like a particular energy drink, so I wrapped five of them!  And he likes, no LOVES, Kraft mac 'n cheese spiral!  So he got 3 boxes of those.
He got gas and Auto Zone gift cards in addition to cash.  It was a good birthday for him!  He's worked hard this past summer...working with a landscape company during the day and at Hungry Howie's at night. 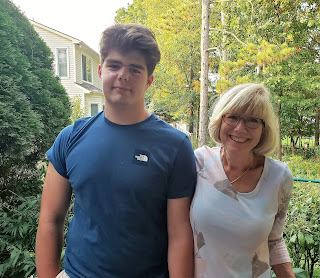 I think he's taller than his father!!!  I asked Nick when he was going to take his grandma for a ride in his Jeep.  He said "when ever" and I said "OK"...he threw his keys up in the air and said "let's go"!  Love that kid!  And he had the top off his Jeep so it was like riding in a convertible!  Talk about being blown away!  But I'd do it again in a heartbeat!! 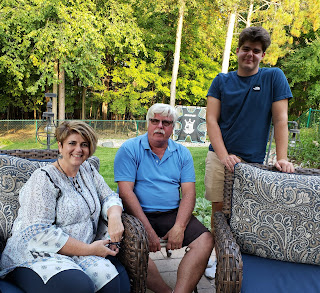 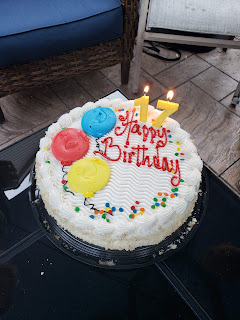 It was great to spend time with the all the kids and we are proud of Nick!  He's a quiet kid and his dad, Darrin, said "you have to show the email you got this week."  So, Nick hands me his phone and I read outloud the email acceptance letter he got for Michigan Tech!  This was his first college acceptance letter so we were all pretty excited!  Only problem the school is in Houghton, Michigan, which is almost 9 hours away!  Not a weekend trip home, that's for sure.  Nick is looking at other colleges, two are in Michigan and within a decent distance.  We'll see....hard this year with not being able to visit these schools in person.  So many tours were cancelled last spring, which is hard for seniors.  Virtual tours are nice but not the same as being there in person.  He'll make a good decision and we'll all be behind him regardless of the school he picks.