My bud, Jan, came over this past week for a project she wanted to work on.  It's called an 'exploding box'!  To tell the truth it certainly looked a little daunting!  But we did it!!! 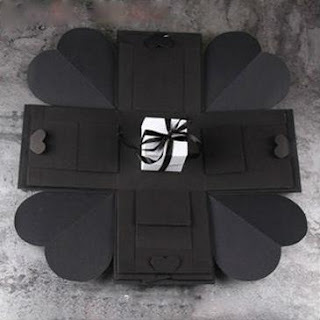 You can see why we thought it might take a day or two to finish!  But we did it in less than 3 hours.  Jan had all her pictures she wanted to include in the 'box'.  She just had to decide where each picture would go and get each picture trimmed to fit the slots!  That was the hard part!  HA 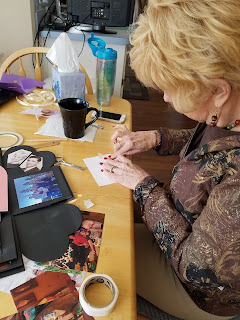 This is beautiful, Miss Jan, working hard on the 'box'! 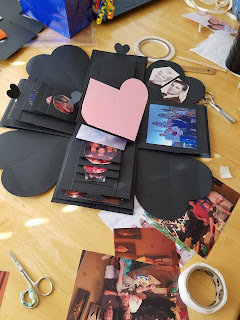 We laid out all the pics in the area Jan wanted then she started to cut and paste (so to speak!). 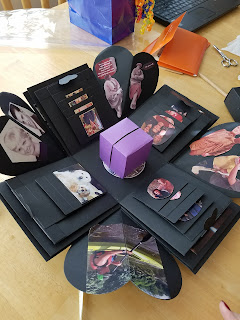 All finished...the purple box can hold something special.  Jan's daughter is fond of unusual rocks, so she might put a special one in that box. 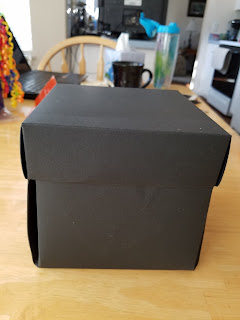 This was almost a two person job...folding the bugger to make a box!!! 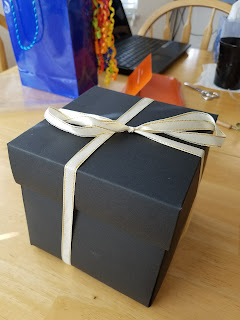 And now it's all tied up nicely ready to be open!

Check out the video of the finished box!  How cool is this!

I'm going to order one and make it for Amber for her 19th birthday this coming August!  She'll love it!
p.s.  Just fyi...it took Jan several, several weeks to receive this box via mail from China.  I've read some negative and positive reviews on the web site I linked to above.  I think it's because the items do come from China, hence, the long delivery time.  Just fyi...I did order one but I don't need it until late summer!
Posted by Robbie at 5:30 AM