Honestly, Bob and I are "workin" hard!  We usually stain/paint our deck every 2 years or so but this year Bob noticed several of the boards were rotten.  He called to get some estimates on the repair and after hearing the estimate (I should say after he picked himself up off the floor!), he decided he would replace the boards himself. 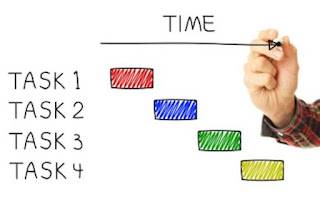 As with any project, once you define the problem, decide on the resolution, identify resources/products needed,  prepare your timeline and identify your 'team', heck you're well on your way!

We all know Bob is very project oriented and I know a job he does will be done well.   He's been working on his excel sheet, measuring, buying lumber and equipment and now we are in the construction business!   I showed this picture in my last post  but it gives you an idea on the size of the deck.  The top level opens from our dining area then you go down about 8 steps to a small level, then more steps down to the yard area. 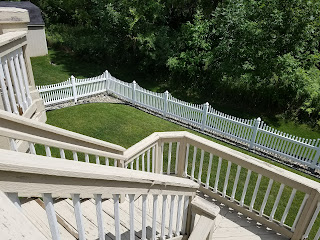 You can see the 2nd level at the bottom of the stairs.

Bob started this past weekend by tearing off some of the bottom boards that needed to be replaced on the top level. 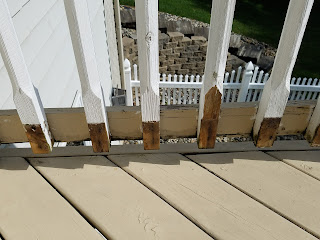 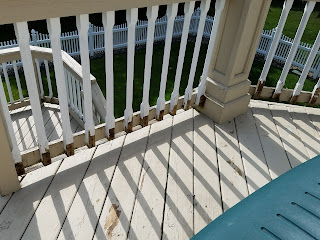 He's cut some boards and stained them but before he replaces them we have to paint the bottom of the spindles....guess whose name was on that 'task'!  Yep!  That's me!

Actually, we had our house built over 21 years ago and I've always painted the spindles and then helped paint the rest of the deck with Bob.  So no surprise my name was on this task!

So on Tuesday I painted the entire spindles.  You can see the wood showing where the original boards were just nailed in place.  Deck builders didn't do any of the staining the year we had the deck built.  Bob thought it best we stain the bottom to help prevent more of the wood rotting out and while I'm there I might as well just paint the whole spindle!!!  Yep...that's a project manager for you! 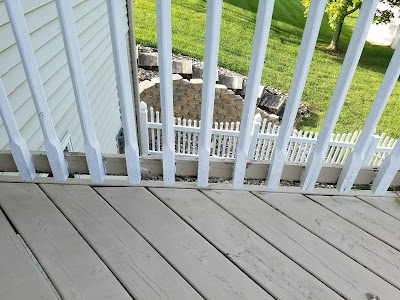 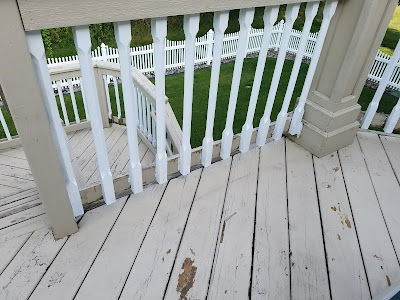 It really didn't take that long but it sure was hot on the deck!   The flooring looks bad but it's because Bob used the power washer on the deck...we're going to power wash and scrap more of the stain off before we paint the floor.....but we have a long way to go until that job is ready.  Right now Bob needs to cut the boards and replace on the inside of the top deck.  Then he'll do the same on the outside.

Then we can start on the lower deck area, down the stairs then come back upstairs to the top deck and replace the top boards!!!  Whew...I get tired just thinking about this job!

It is keeping Bob busy and he's really enjoying see how much money he's saving by doing it himself!!!   But my reward is dinner out so it might not be so cheap for him after all!!!
Posted by Robbie at 5:30 AM