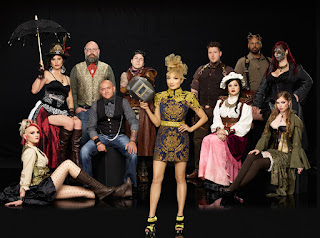 I happened upon a series on Netflix called Steampunk'd....and I am hooked.  This is a 'game' show where 'makers' (that's what the artists are called) work in teams designing rooms in a 'house'.  Each episode someone is eliminated based on their work.

I am hooked...if you want to watch on Netflix, do not go to the link above...or you'll see the winner of the $100,000 grand prize.  I don't think it's in reruns on the GSN channel but guess you could check that out if you don't have Netflix streaming. 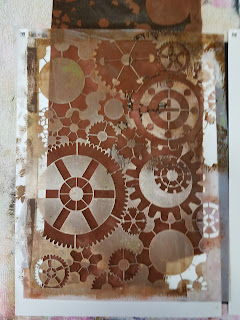 Today I decided I would stencil some 'gears' just because I was so inspired by the Steampunk work in this series.  So off the 'girls' (my dogs!) and I went to my art room and played!

I've had this gear stencil for several years.  It's from Mary Shaw and has had a lot of use from me and others over the years!  First off, I mixed brown acrylic paint with a small amount of Raw Umber soft body paint I had left.  I also added Liquitex Glazing medium just because I didn't have any other medium handy!  HA 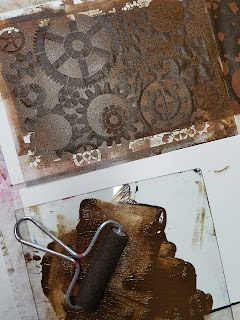 The brown fabric is a  shibori piece that you can hardly see any of the shibori pattern on. 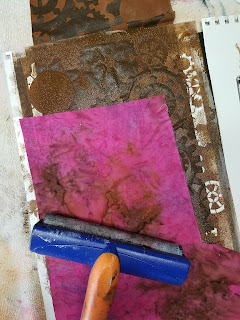 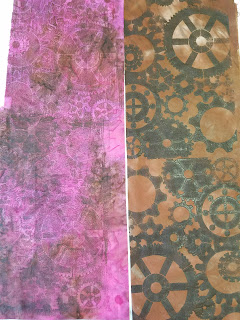 And here are the two pieces!  I can see some hand work on those gears!


I like the clarity of the brown stenciled fabric but kinda love the pink!! 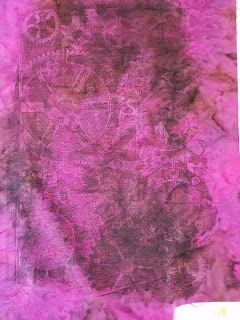 I  also had a piece of watercolor paper that I used to pick up the remaining paint.  This turned out really good didn't it! I'll have to use it to make a card or write a note on!  Waste not, want not!! 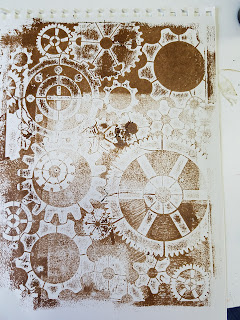