Am I doing anything?

I am actually working on multiple projects but it seems I've been on the go or just working around the house more and more rather than sewing.  OK, truth be known at night instead of my favorite hand work I have been binging on Netflix, watching Foyle's War!  I am so hooked!  It takes place in the 1940's during the war and is SO interesting.  Each episode is a mystery story or two!  There are 8 episodes and I've watched 5 so far...just started episode 6 while the baseball game is on.  I can always watch replays!  HA
I did finish hand stitching all the hex areas in my Beach Glass/modern quilt piece! 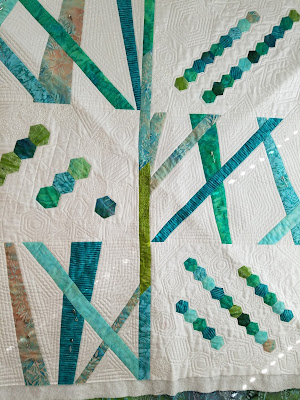 Next I started to hand stitch in the other strips but now I decided I'm not doing that.  Instead, I think I will free motion quilt or straight stitch instead....well see!  I am planning on 'unsewing' today and start some machine stitching. 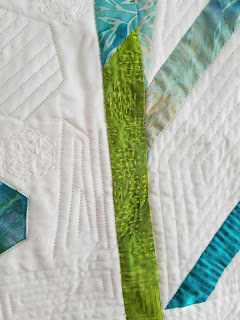 I'm also working on a challenge piece I am part of in Florida with three other ladies.  I can't really show all of it but here's a peak!  Yep, it's all hand stitching! 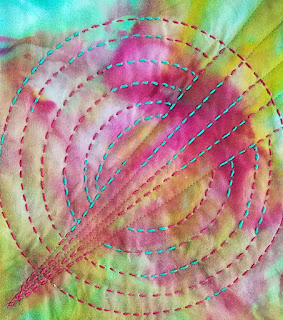 I have alot of hand work to do on this piece but I am enjoying working on it.  It's isn't due until January time frame but because of my hands/wrists I need to work on it while the hands are still working.  I can have one more injection in December, if needed, but I would prefer to have this piece finished before December, so I can just relax and not feel pressured to finish or start new projects this winter.  I have too many places to go, people to see and things to do with my Florida buds!

One big event this week was Bob took me to see the movie, Sully!!!  First off the movie was great!  I actually forgot they were acting and I wasn't just watching a documentary/story being told by someone.  Tom Hanks did a great job...I forgot it was Tom and not Sully!!!
This movie going was a big event for us because since Bob and I have been together (over 25 years) we have only seen 5 other movies together.  He isn't a fan of going to the show...too loud, too bored, too...whatever.  He did enjoy this movie and wants to go see The Magnificent Seven next!  Woohoo!  We might set a record attending shows this year!  HA
Posted by Robbie at 6:00 AM