Yep, our dogs are just like kids...hate when they get sick or hurt...so last night little Gigi was coming back into the house from going potty and let out a yelp!  When I sat down I reached over to pick her up and saw blood all over!  WHAT!  This is what we found! 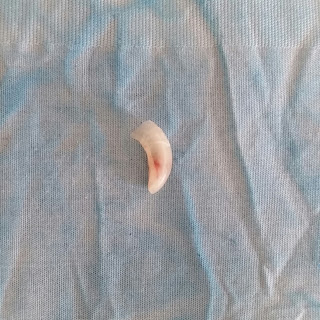 This isn't a tooth!  It was Gigi's back toenail!  Appears it got caught when she jumped to come into the house.  Poor baby!  The house on the other hand...carpet to be exact looked like a scene from CSI!  Blood everywhere!  And I mean everywhere!!!  What a mess...but, first things first...I rinsed off both Gigi's back feet, as I didn't know which foot was 'hurt'..since there was blood on both back feet!
I had Bob hold her while I got the flashlight to see what happened.  That's when I saw she had lost the entire toenail and her quick was bleeding.  So, Nancy Nurse got her bandaged up and then it was time to start cleaning the carpet!
First, I sprayed with cold water and blotted up as much as I could then use Resolve carpet cleaner.  Worked like a charm!  You can't even tell where the body was...I mean where Gigi had walked!
Next up was taking her to the vets today making sure there wasn't any other damage.  They cleaned it up quite well and reapplied a new bandage, which she has to keep on for two more days. 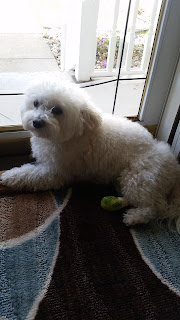 She looks very sad her but actually she isn't.  You wouldn't know something was wrong with her...eating, wanting to play, jumping on furniture!  I do have her pain meds, just in case!   Poor little Gigi...she's had a rough life and this is just another something for her to put in her 'journal'!  I would prefer to write about happy events for now on!  Just sayin!
Posted by Robbie at 4:18 PM