Geezzz  I forgot to post about our grandson's BD party a week ago!  How could I!   Nick turned 12 on Sept. 26th and for once he didn't have a football game on his birthday (he did have a game the next day!).

So, the family all got together for a BBQ rib dinner on Saturday, compliments of Darrin cooking the ribs and Kris cooking most of the other dishes. 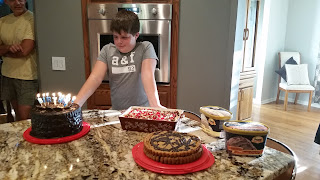 Kris' mom always makes the cake and she outdid herself again!  She made an Oreo cake, as it's Nick's favorite!  And a banana split layered dessert along with a large chocolate chip cookie!  YUM!! 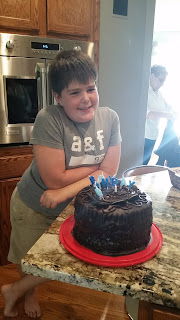 And of course there are the presents. Nick is a big Xbox fanatic and wanted the new Forza6 game.  Well, there are so many different editions I just got a gift card for Xbox from us so he can get the set he wants.  He is good at racing the cars and certainly knows his cars!   He's a good student and football player so guess he doesn't spend all his time on the Xbox...just most of his free time!  HA 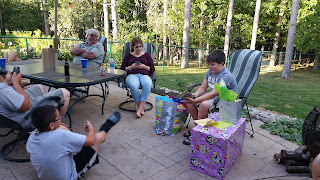 Auntie Dawn and uncle Jeff got him an actual steering wheel that connects to the x-box setup.  Guess the good thing about that is he'll learn to drive!!  We hope! 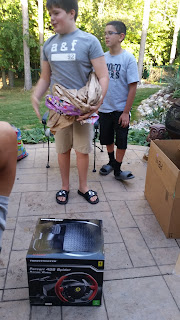 This was the main meal.  In addition to the ribs, Darrin also made port tenderloins...all were delicious.  Kris is such a great cook and made lots of dishes for us to fill up on!!  I made Oriental Salad and brought a cheese tray. 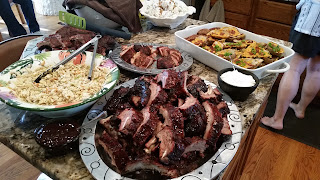 Kris made a new corn dip she found on Pinterest that was really good with the chips!!  I'm taking the recipe with me to Florida for a dish to pass at one of our get-together dinners. 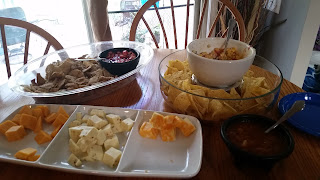 .All in all it was a great day...weather wise and just being around family!  And my apologies to Nick for the late post!!  Grandma will have to do something to make it up to him!!
Posted by Robbie at 7:00 AM