One of the reasons I love summer, no it's not because of the hot weather (not a fan) but because of the birds we feed!  This year is not exception!  We have 3 birds nesting about 5 feet apart under our deck!

The first picture is a Dove nest!  I have to say she isn't that great about making a nest.  I told Bob she's a sloppy homemaker!  HA

The 2nd picture is our robin, who nests under our deck every year...or at least one of their previous fledgings grown up come back to where they were born.  Yes, she has some of her nest laying around but at least she has a nest you can see!

The 3rd picture, which is hard to really see is a neat little Finch nest!  This is the first time a finch and dove have nested under the deck!  Today I watched one little baby robin finally leave the nest!  That will be sad but in past years the Robin has had more than one nest!

We place a hummingbird feeder out along with two separate bowls of jelly.  So far we are feeding: Hummingbirds, Chickadee's (yes, they eat jelly!), House finches, Red breasted Grosbeak, cardinals, Orioles, Doves...I'm sure I'm missing a bird or two.  I can see the feeders from our kitchen so they amuse me when I'm cooking or doing dishes. 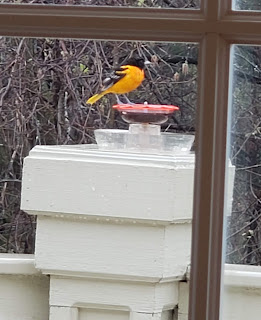 I love the Orioles.  We've seen several males at one time and a female comes and goes.
Now I need to tell my snake story!  My next door neighbor called me yesterday afternoon to say she had a snake caught in the dog yard under some plastic/straw panel they had laid down.  She didn't know what to do so I said I'd be right over. 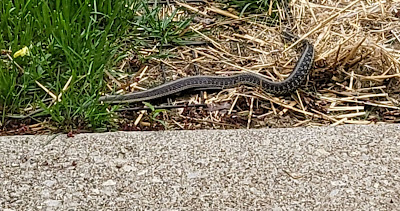 Well, this is what I saw...this little garden snake...poor little guy's belly was swollen where he was wrapped in the plastic netting!  I asked Lori for a pair of scissors because it was obvious he was tangled up so much we needed to cut away the netting.  Which I did!!!!  It wasn't easy because it was so tight around his body I was afraid of cutting into him.  But it worked and he slithered away!!!  Poor little guy!  I'm not fond of snakes because usually they startle me but seeing this little one having an issue I felt so bad for him and so did Lori.  We now call ourselves the 'snake wranglers'.  HA
I'll have to make sure to keep my camera ready so I can take pictures of all the different birds that eat at the Payne's restaurant!  Or any more snakes!
Posted by Robbie at 3:50 PM