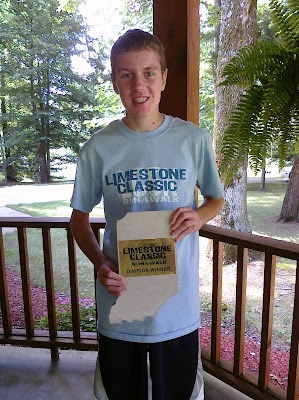 Today is bragging rights for this grandma and 'mum'. Seems like all the 'kids' are being pretty active this summer. Makes me feel like such a slouch!! Ian ran in a 5k race this past weekend and got 1st place in his age group!! Congrats, IAN!!!! He received a very nice limestone trophy which really is pretty cool. Kids live in Indiana, hence, the outline of the trophy. I think he should have rec'd a LARGE bottle or two of water. MJ said it was HOT but he ran really well! Ian loves to run and he's good at it too. I did have a widget of his races this past school year and hope to do the same next school year. Actually, Ian's also good at basketball and all other sports!! Just a natural.

Kayla was also busy last week assisting at an athletic training camp held at Ball State. The camp was for high school students and Kayla was part of the staff. The pics are her with other ball state staff and one where she is getting "taped up" during a class! Kayla is 2nd in from the right. 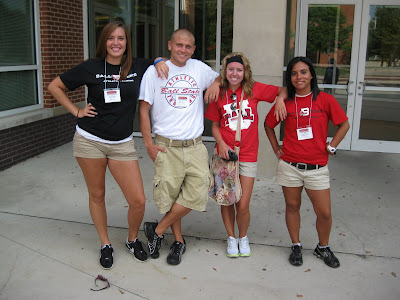 This is Kayla being 'taped' up....why being taped up? Kayla is studying Sports Medicine at Ball State and I'm glad she is. When the kids were here last Nov. I sliced my finger (badly) with guess what, yep, rotary cutter..but Kayla knew how to tape it up! Pays to have medical people in your family doesn't it! 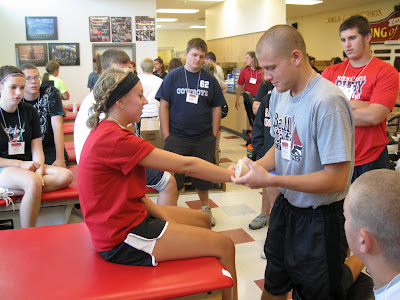 This past Saturday…my son, and his friend, John teamed up with two others (Bonnie and Bob) to form a 4-Person Co-Ed Team (Team JEAR/Chrysler-Jeep) and participated in a 28hr Adventure Race. The race is called The RAGE...go figure! This is just a recap from my son:
"The canoe leg took us 3hrs to complete the 15 mile section; then we moved on to the Mt Bike section (30 miles); then switched out the bikes for running shoes for the 16 mile trek leg to located 16 Check Points. After refueling our bodies we headed off on the Mt Bike leg for the next 30 miles of Mt Bike trails. The team covered the majority of the course in just over 27hrs straight! Most people just cannot imagine putting your body or mind through a challenge like this, but when you complete a race like this as a Team…it is just amazing and so rewarding! "
This picture of my son is from a race earlier this year but I had to post a picture so this will do! 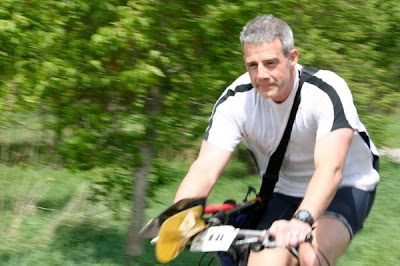 The Team finished with a 5th Place Over All Finish and 3rd Place in the Co-Ed Division (4-person.). CONGRATS, Darrin & your team(s)!!! No, he didn't get this 'sport' from me! I sat on the back of horses!
Progress on my MQAI piece came to a halt when I decided I didn't or shouldn't have cut my 'birds' out. I've done this technique two different ways and decided I didn't want it cut out (after I had!)..so I had to repaint! Soooooo I had this drawing already drawn out on the wrong side of my Tyvek, so I just retraced the picture on the right side, which is now in reverse! But who cares or who knows, right! Anyway, I did finish the entire painting. I used a walnut ink for the background and I think it looks very much like bark, which was the intent! Now to quilt and burn! 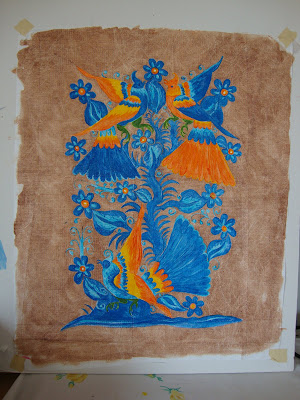 Today is Drs. appointments and running errands with Bob so I won't get my piece sandwiched until Friday. Thursday is our CCC fiber meeting and I'm making a cake to celebrate our 8th year anniversary of forming this group.
Mandy is doing so much better. She's actually trying to put her foot down and bear weight on it but when she does she limps really bad. She's getting so good at running on 3 legs! And her tail is up and wagging so we know she feels good. She's still confined to the living room and carpeted hall area. She still can't walk/run on our wood floors. But so far so good!!!!
Posted by Robbie at 7:14 AM